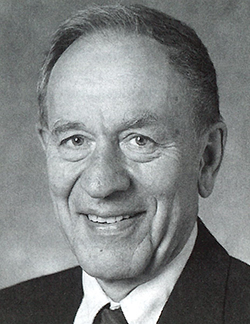 Mark McDermott, a UW physics professor for 43 years, passed away Nov. 4 from complications related to amyotrophic lateral sclerosis, also known as Lou Gehrig’s disease. He is remembered for his caring mentorship of younger professors, deft administrative leadership and devotion to advancing the physics department at the UW.

Born in Yakima in 1930, McDermott graduated from Walla Walla High School and went on to earn his Ph.D. from Columbia University in 1959. There he met his wife, Lillian. They would be married more than 52 years.

McDermott accepted an assistant professorship at the UW in 1962. Due to nepotism laws at the time, Lillian, also a physics professor, could not teach full time at the University until 1973. Prior to that, she worked at Seattle University. In 1974 McDermott was promoted to professor, and he assumed his first administrative role as associate chair of physics in 1976. He was appointed chair in 1984.

During his decade-long tenure in that position, McDermott did much to expand the UW’s nuclear physics program. He also instituted an award-winning tutorial program under Lillian’s direction. Additionally, he handled the departmental side of the $76 million construction of the physics and astronomy complex, which gave the department a 40 percent increase in space and high-tech labs and classrooms. “We’ve brought ourselves up to national standards,” he said in a 1994 interview.

During his time as physics chair, McDermott was witness to many awards and advances within his department. His proudest moment came in October 1989, when Physics Professor Hans Dehmelt won the Nobel Prize, the first rime any UW faculty member received that prestigious award.

McDermott was a fellow of the American Physical Society and a member of the development board of the Center for the History of Physics. He also served as chair of the UW Faculty Senate, and worked to revise and upgrade the undergraduate laboratories. He retired just two years ago.

McDermott was an enthusiastic outdoorsman. He enjoyed hiking and bird-watching, and often commuted to campus by bike from his View Ridge home.

Toufic Hakim, executive officer of the American Association of Physics Teachers, said on the association’s website: “The passing of Professor McDermott is a loss not only for the UW, but to the physics community for which he was a great friend and benefactor.”

He was 76 years old, and is survived by his wife, three children and four grandchildren.