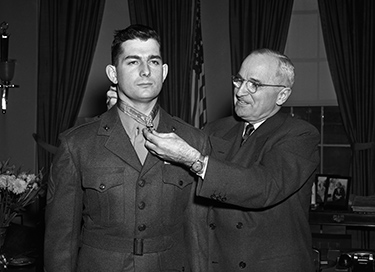 Students, alumni and friends of the UW have raised more than $100,000 for a memorial to former UW students who have received the Medal of Honor, ASUW President Cullen White announced April 9. Major gifts from the Apex Foundation and TriWest Healthcare Alliance helped reach the goal, as did gifts from KVI radio listeners.

In 2006, when the UW Student Senate tabled a motion to honor a single Medal of Honor recipient—Gregory “Pappy” Boyington, ’34—students and the University suffered from a torrent of bad press and angry e-mails. White said it was always the students’ intention to create a memorial instead to all UW recipients, a fact that was often lost in the initial uproar.

During the drive, the UW learned of another alumnus who received the U.S. military’s highest honor. Archie Van Winkle, ’61, served as a Marine Corps platoon sergeant in Korea. On Nov. 2, 1950, he led a daring charge during which a bullet shattered his arm and a hand grenade exploded against his chest. He refused to be evacuated, and his leadership enabled his outnumbered platoon to repulse an enemy attack. Van Winkle originally attended the UW in 1942, but soon enlisted in the Marines. The World War II veteran returned to the UW briefly in 1948, but left to join the Marine Reserves. In 1960, the Marines assigned him to a college degree program so that he could finish his B.A in history. He spent his career in the Marines, retiring as a lieutenant colonel in 1974. He died on May 22, 1986.

In addition, Bruce Crandall, who was drafted while a UW student in 1951–52, received the Medal of Honor Feb. 26 for his actions as a helicopter pilot 42 years ago during the Vietnam War. While medical evacuation was not his mission, on Nov. 14, 1965, he led two aircraft to a landing zone that was under relentless enemy fire. Crandall supervised the loading of seriously wounded soldiers aboard his aircraft and continued to fly into and out of the landing zone throughout the day and into the evening. He completed a total of 22 flights, most under intense enemy fire. Although the battle cost 305 lives, the death toll would have been significantly higher if not for Crandall’s actions. Crandall retired from the Army in 1977 as a lieutenant colonel and then had a career in city government.

Including Van Winkle and Crandall, the UW has eight former students who have received the Medal of Honor.