Monkey business: The story of the UW Medicinal Herb Garden and its guardians 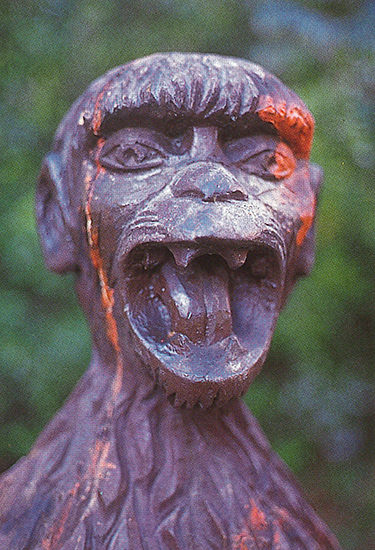 A close-up of a wooden monkey that once guarded the UW Medicinal Herb Garden. Photo by Jon Marmor.

They hear all evil and see all evil. Unfortunately, they have frequently been the victim of evil.

In the 66 years they have rested atop twin 12-foot poles at the entrance of the UW’s Medicinal Herb Garden, two guardian monkeys have repeatedly been sitting ducks to vandals. They have been stolen, smashed, and even changed from wood to cement to make them more theft-proof. Only that didn’t work so well; while the cement monkeys were never stolen again, they were smashed and broken.

It’s hardly the tale you would expect to come out of the garden, which was created in 1911 by the School of Pharmacy as a one-acre, living laboratory. Though fashioning medicines out of herbs has fallen out of favor, the garden—the largest medicinal herb in the western hemisphere—has always been a quiet place to take a stroll, take a deep breath, and lose yourself in an oasis in the heart of a huge metropolitan city.

Two-foot-tall gilded monkeys, carved by UW carpenters, were first placed atop ornate wooden poles in 1930 to keep a symbolic eye on the garden. According to Carla Okigwe, a former president of the Friends of the Medicinal Herb Garden, a 400-member volunteer garden caretaking group, the monkeys see and hear all evil. And oh, have they seen and heard it.

The original wood-carved figures—said to be copied from Europe’s first medicinal botanical garden in Padua, Italy—lasted until the 1960s, when they rotted and were replaced by another set carved from cedar. In January 1987, one of those monkeys was stolen. Then, David Stone, a UW art graduate, was commissioned by the Friends of the Medicinal Herb Garden, to create a more theft-proof monkey made of cement. Using the remaining wooden monkey as his model, he recast two monkeys, similar to the 1960 simians, and they were dedicated in December 1987. 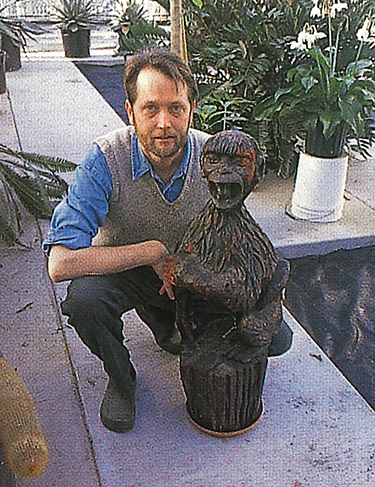 Doug Ewing kneels next to a wooden monkey preserved in the Botany Greenhouse. Photo by Jon Marmor.

Unfortunately, that wasn’t the solution. The following summer, someone, possibly using a sledge hammer, knocked one monkey off its pedestal and smash one of its legs. That required $500 worth of repairs. Only the 100-pound weight of the cement monkey may have prevented its disappearance.

“It’s kind of sad when the very symbol of the garden gets trashed so often,” says Doug Ewing, who oversees the garden and manages the nearby Botany Greenhouse.

For the past decade, the monkeys have enjoyed a breather from vandalism, though every now and then they do get dressed up with clothing or a baseball cap by a passerby. But the garden they watch over has continued to struggle. Once home to 836 species on eight acres, the garden was cast aside when the drug industry and School of Pharmacy turned their attention toward creating inexpensive synthetics to replace natural drugs. The UW cut off funding completely in 1980, and pharmacy turned over control of the garden to the botany department.

The garden suffered from neglect until a few years later, when the Friends of the Medicinal Herb Garden was formed and took over caretaking duties. Most recently parts of it were closed due to the construction of the new chemistry building, but now it is restored, monkeys and all.

The lone surviving wooden monkey now lives in the Botany Greenhouse under Ewing’s watchful eye. And the cement monkeys sitting atop their roosts, keep an eye on all below them—hoping they won’t be stolen or harmed again.