Montlake lot isn’t the dump it once was 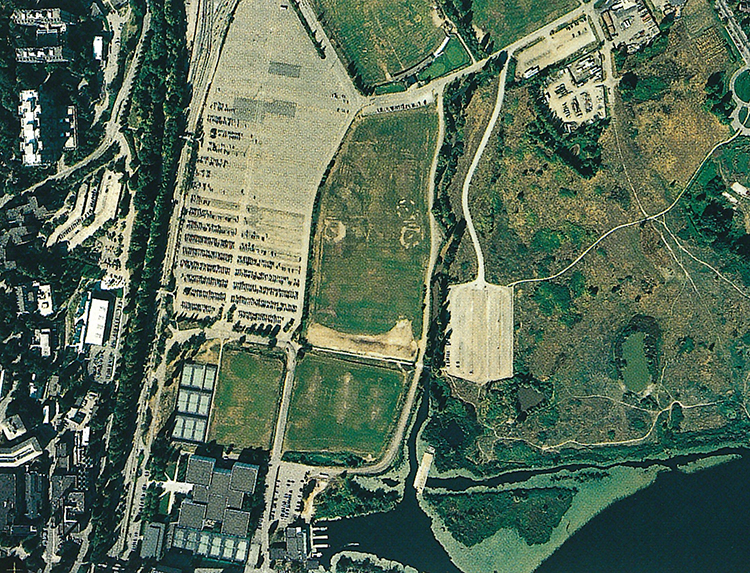 An aerial view of the Montlake dump site today.

Commuting students still groan when told to park in the Montlake Lot, far from the heart of campus. But it isn’t the first time that stretch of nearly 200 acres has been dumped on.

For decades, people turned their noses up at the parcel tucked in between Montlake Boulevard and the waterfront north of Husky Stadium because it was once Seattle’s largest garbage dump.

From 1926 to about 1966, the Montlake disposal site, also known as the Ravenna Dump, the Union Bay Dump and the University Dump, was used as both a fire dump and a general landfill. It received from 40 to 66 percent of Seattle’s garbage (110 truckloads of garbage a day) from private contractors, as well as contributions from individuals and industries.

Not everyone objected to the place, which was notorious for the offending aromas that would waft toward campus and adjacent neighborhoods. “It was a little kid’s absolute fairyland,” recalls Jon Rider, ’63, who remembers coming to the dump as a child. “It was such an adventure to go to the dump with my dad in the big pickup truck.

“With the bulldozers and burn pit, old car parts, shards of ceramics, there was everything a boy would need to build a solid fort.”

The dump was also appreciated, to some degree, by the UW rowers who used to live right next door at the old Conibear Shellhouse. In between classes and rowing practice, they would kill time by shooting at rats living in the landfill.

But there were hazards for the rowers, as Rider, a UW varsity rower for two years, recalls. “Hundreds of seagulls were always at the dump,” he says. “One spring day, I was out in a shell with a teammate when a seagull overhead peeled off from the rest of the flock and launched at us. It was like watching a bomb come at us, with no place to go.” The missile hit his teammate, and Rider laughed so hard he dropped his oar in the water.

But the dump was no laughing matter for the UW and its neighbors. In 1964, the regents voted to end the practice of refuse trucks dumping their loads at Montlake. In 1972, a special UW committee headed by Botany Professor Richard Walker had to decide how the land would be divided up.

In the end, some of the land was paved over and became part of the Montlake E-1 parking lot, the largest on campus with 2,565 parking spaces. Some was divvied up into athletic fields and tennis courts adjacent to the IMA Building. The rest became the Ecological Research Area, a 55-acre gem along the Lake Washington coast that contains vegetation and wildlife so rich that UW classes on wildlife, landscape architecture and civil engineering use it as a laboratory.

The dump’s legacy lives on underfoot and in the air. King County Health Department studies determined that toxic chemicals had been dumped at the site. Also hazardous were the high levels of methane in the area. “There are very few records of the site so it’s difficult to tell exactly what’s been dumped there,” says Wayne Turnberg, a county health department official and one of the directors of a 1984 landfill survey. No doubt some chemical wastes were dumped in the landfill, but UW environmental health officials say that the quantities were probably too small to be of any concern.