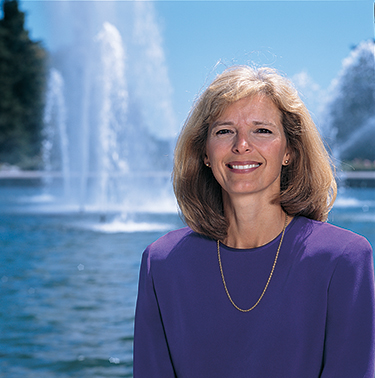 Dawn Williams, ’88, says she’s not your typical UW graduate. She lived at home when she started as an engineering student in 1975, dropped out to become a flight attendant two years later, and had to talk her way back into business school after two quarters at a local community college.

Once back in school, she kept her daytime job, taking evening classes throughout the year-even summer quarter. “I put blinders on,” she says of that period. “A lot of my friends wondered what happened to me. I wasn’t around to socialize,” she recalls. “I just came to campus to go to class.”

While she might not think she was a “typical” student, Williams’ experience actually is a close match to what many UW undergraduates go through today. About 40 percent commute to campus rather than live in dorms, Greek Row or the “U” District. Almost a third of current undergraduates are transfer students. About 80 percent of all undergraduates work part-time or full-time. And a majority of them are women.

So it seems particularly fitting that this month Williams becomes the 55th president of the UW Alumni Association, representing more than 300,000 living UW alumni. She is only the seventh woman to fill that role in the 114-year history of the organization.

Williams has been a witness to the last 10 years of UWAA history. She joined the UWAA Board of Trustees in 1993, when she was president of the Business School Alumni Association. In addition to her time as a UWAA trustee, she served as treasurer of the organization for two years and held one-year terms as vice president and president-elect.

The new alumni president is impressed with UWAA initiatives to provide career services to graduating students and alumni, and she also praises the expansion of the UWAA scholarship program. More than $168,000 was raised for student scholarships in 2002-03, a record for the alumni association.

While other non-profit organizations are struggling, she notes that UWAA membership numbers are going up “despite a pretty crummy economy.”

She praised Executive Director John Buller, ’69, ’71, as a phenomenal leader. “We’ve made huge inroads into defining who we are and communicating that to our alumni and the University,” she says. A strategic plan is in place that will make the UWAA one of the premier alumni associations in the country.

“My job is keeping the train on the tracks and picking up speed,” she says.

Williams, 46, grew up on a farm in South Dakota, moving with her family to Redmond when she was in junior high school. She set her sights on the UW-”No question I was going there,” she says-despite the fact that she would be the first person in her family to attend college. She started in 1975, majoring in aeronautical engineering in an era when there weren’t many female engineering students. “I can remember being one of only three or four women in my classes,” she recalls.

During her sophomore year, she decided to follow another lifetime goal and become a flight attendant for United Airlines. While she says that job was an adventure, when United’s pilots went on strike in 1980, she had a chance to rethink her career path.

Moving back to Seattle, she started working for American Express as a customer service representative selling traveler’s checks to banks. “I realized right away I wasn’t going anywhere without a college degree,” she says, but getting back into the UW wasn’t easy.

She wanted to major in business, but the business school rejected her original application. “I met with the dean, who was then Nancy Jacob. I went to community college in Tacoma while I was working. I told myself that I’m going back to the UW—no matter what.”

She continued to work for American Express while she was in school, so when she graduated in 1988, it was natural for her to apply to its brokerage firm, Shearson American Express, to be a financial consultant. Now in her 15th year at the firm—it has since become Smith Barney—Williams has seen historic market highs and the bursting of the high-tech bubble.