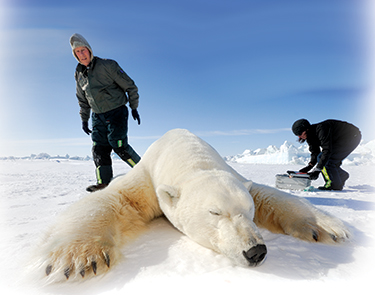 Nearly three years ago, polar bears were added to the threatened species list because their icy habitat showed a steady, precipitous decline due to warming climate.

Now their outlook doesn’t appear to be quite so bleak. Scientists from several institutions, including the U.S. Geological Survey and the University of Washington, have found that if humans reduce greenhouse gas emissions significantly in the next 10-20 years, enough Arctic ice is likely to remain intact during late summer and early autumn for polar bears to survive.

“What we projected in 2007 was based solely on the business-as-usual greenhouse gas scenario,” says Steven Amstrup, an emeritus researcher with the U.S. Geological Survey and the senior scientist with the Montana-based conservation organization Polar Bears International. “That was a pretty dire outlook but it didn’t consider the possibility of greenhouse gas mitigation.”

The new research, published in a recent issue of Nature, is based in part on modeling proposed by Cecilia Bitz, a UW professor of atmospheric sciences. The model indicates there is no “tipping point” that would result in unstoppable loss of summer sea ice when greenhouse-gas-driven warming rose above a certain threshold.

Polar bears depend on sea ice for access to ringed and bearded seals, their primary food source. During seasons when they can’t reach sea ice, the bears mostly go without food and can lose about 2 pounds a day.