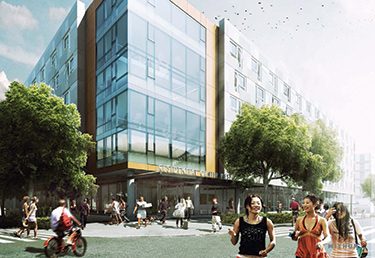 The quintessential UW dorm, Lander Hall, has marked the UW experience of thousands of Huskies over the past 50 years. Now, it is being demolished to make way for new Lander Hall, a leading-edge residence that is part of the UW’s effort to transform west campus into a vibrant community where students feel at home.

The new Lander is slated for completion by January 2014, with a new dining hall, Local Point, opening in September 2013. Terry Hall will then be demolished and rebuilt, beginning in January 2014.

“Ideas have bubbled up from the students and we have listened. We are also working to foster a sense of community that is so important, particularly to freshmen who can be daunted by a large campus environment,” says Housing and Food Services Director Pam Schreiber.

First, at almost 300 square feet, the rooms are substantially larger than those in the old Lander. No more will students wander the halls with towel and toothbrush, as all the rooms will have private bathrooms.

Lander will also host a regional information/ postal center and food court dining facility (Local Point), which will feature rotating menus. It also will have shared kitchens for students to cook meals together.

The renovations to Lander are not the only big changes coming soon to the west campus. In the true spirit of a Seattle neighborhood, UW Dining is adding Cultivate, a full-service, sit-down restaurant in Elm Hall featuring classic Northwest menu items in a range of prices, prepared with local ingredients. Also opening in August is District Market, an urban market featuring campus-grown and other local produce and products in Alder Hall. Both venues will be available to Lander Hall residents after it reopens.

Elm Hall will also feature a Fitness/Wellness Center with cardio, free weights and yoga rooms. Alder Hall will be home to a new Husky Grind coffee shop. And, yes, students can use their Husky cards.