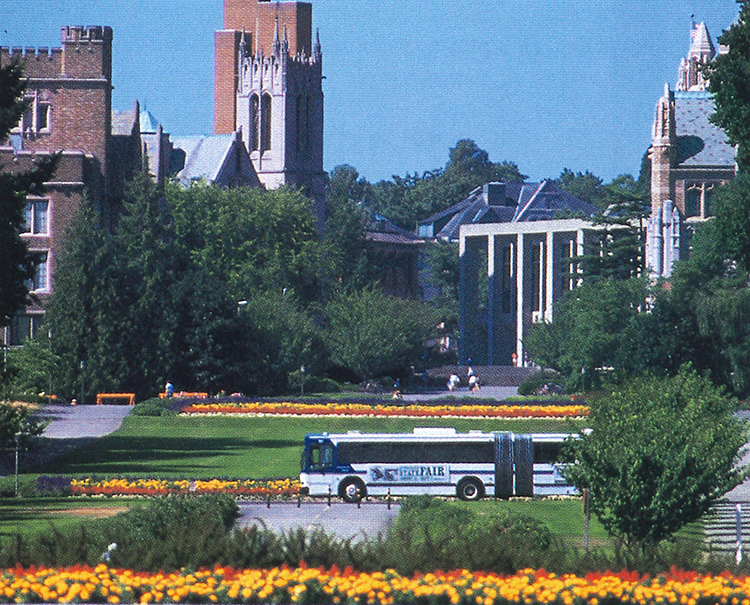 A bus drives on Stevens Way on the UW campus.

Packed buses, empty parking spaces and less traffic conges­tion, can this be the same “U” District that was once a bumper-to-bumper bottleneck? Yes, say UW officials, who proudly point to the new U-PASS system, one of the most comprehensive transportation management programs in the nation.

With U-PASS, students, faculty and staff may purchase a pass that allows unlimited bus travel in King and Snohomish counties. The pass also provides other commuting benefits and retail discounts.

Contrary to public opinion, the University is not generating many more car trips each year. Even before the U-PASS program, UW-related traffic across the Montlake Bridge held relatively steady. Since 1983, it has been the non-UW share that has added pressure to that bottleneck.

Thanks to U-PASS, for the first time since 1983 Montlake Bridge traffic has dropped. The University’s share of morning rush-hour traffic was down 13 percent, while non-UW-related bridge traffic was up by almost 3 percent.

While U­PASS promotes a mixture of transit options—including car pools, vanpools and bicycles—its main focus is to encourage the use of buses. In the first year of the program, Metro has expanded bus service to the University by about 22,500 annual hours. By 1993, it will boost service by another 37,000 hours. Community Transit of Snohomish County has also increased service.

Williams says about 24,500 students have purchased the U-PASS—73 percent of the total student body. About 11,400 faculty and staff, 69 percent of the UW’s employee pool, are also pass holders.

Other numbers also depict the new system’s impact. Faculty/staff parking permits are down by nearly 800, while student parking permits have dropped by 285. Registered car pools have risen from 698 to 810.

Students pay $20 a quarter for the pass. Employees pay $27 per quarter. Those who drive alone to campus get a U-PASS along with their parking permits. Those permit fees rose from $24 to $36 a month as part of the new transportation program.

The UW conceived of the U-PASS as it developed its master plan for new campus development. The University plans to construct a number of new buildings over the decade to provide “state of the art” teaching and research facilities. These new buildings are essential for attracting and keeping top faculty and students.

Some of the construction sites eliminate surface parking lots. Parking garages are funded by parking permit holders. The more garages needed, the higher the parking rates. The University must either consolidate its parking in expensive garages or encourage more people to leave their cars at home. Williams says the U-PASS has already helped absorb the loss of several hundred parking stalls due to construction of a new physics/ astronomy building and a new wing of the Health Sciences Center.

During the school year, the UW triggers about 60,000 trips each day to the district. At the end of the U­PASS three-year trial period, UW planners hope to have cut that number by 5,000.