Nisqually put the ‘Earthquake Guy’ in the spotlight 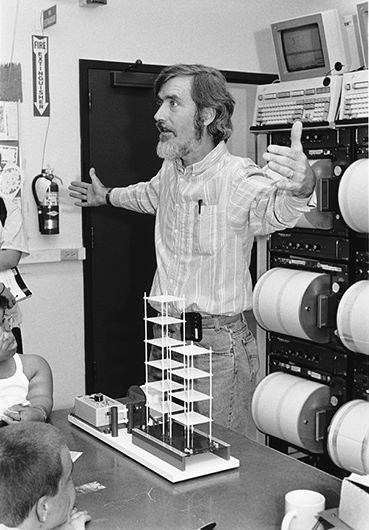 Bill Steele and the rest of the UW Seismology Laboratory crew quickly came to grips with the 6.8 Nisqually quake that struck on Feb. 28.

If you live in the Seattle area and watch TV news, you’d recognize Bill Steele. His official title is coordinator of the UW’s Seismology Laboratory, but you’d know him as the “Earthquake Guy.” He is the UW expert that the media interviews every time there is an earthquake in the region. Although he’s used to dealing with reporters, he’s never experienced a day quite like Feb. 28, 2001.

Steele was participating in a daily Seattle ritual—ordering coffee at a local Starbucks—when the Nisqually earthquake hit. “As soon as we knew what it was, we were out the door,” Steele recalls. Part of a team of geologists going to an earthquake preparedness meeting, Steele didn’t even have to tell the driver what to do. “He made a U-turn in the middle of 45th Street and sped back to campus,” Steele recalls. “I remember seeing people pouring out of their buildings while the streetlights were all dancing.”

Once inside the basement lab in the Atmospheric Sciences Building, Steele found a crew of undergraduates, graduate students and faculty already taking phone calls and contacting emergency agencies. The lab is the collection point for 45 digital, real-time seismometers spread across the region. Thanks to the system, Steele and his colleagues could tell early on that the intensity of this quake was less than one might expect from a quake of 6.8 magnitude. Relaying that message to emergency response teams helped relieve some of their anxiety in the first minutes after the temblor.

Then there was the media. As soon as a lab worker put down the telephone, it would immediately ring with a call from another reporter. Local stations and national networks camped out at the lab, broadcasting live reports. Media hounds, desperate for a source, grabbed anyone they could. “One of our undergraduates was interviewed by the Chicago Tribune,” Steele notes.

Some of the post-quake attention can be draining. “If there is a brick on the street, it’s going to be photographed from 57 angles,” Steele sighs. But the lab has an open door policy. “We let them hang out in between their live spots. It gives you a chance to answer their questions and educate them,” he explains. The policy has paid off. “Media reports in the Puget Sound area have really improved. There is some outstanding reporting going on,” he says about earthquake coverage.

Speaking of coverage, Steele says in addition to students and faculty, alumni and former lab employees suddenly showed up to support the lab. “We had people who worked here 10 years ago just come in, sit down and grab a phone,” he says.

But that turnout shouldn’t be surprising. The lab is a microcosm for what goes on at this University—teaching, research and community service all wrapped up in one package. And it is a microcosm of the people who make this University great—students, faculty, staff and alumni intent on helping us understand the natural forces that can change our world in an instant. Next time you see the Earthquake Guy on TV, think of him as another symbol of what the University of Washington gives back to its community.