He was an architecture professor, a mentor and a gentleman. 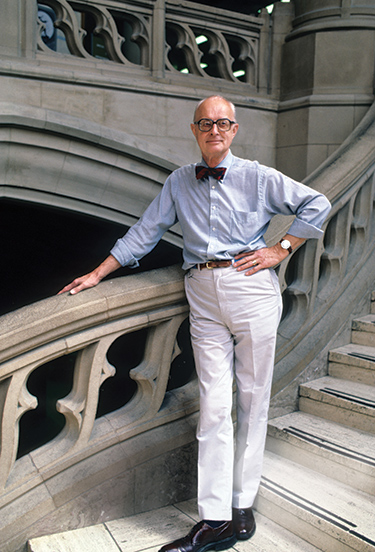 Professor Emeritus Norman Johnston had the buttons on his blazers replaced by those bearing the University of Washington’s crest; such was his love for this University. When I arrived here in 1964, he was associate dean of the College of Architecture and Urban Planning, and the first UW person I met. He was standing in the foyer of Architecture Hall. “I’m Johnston,” he said. “You must be Hildebrand.”

His early life had been spent in Olympia, where his father supervised construction of the State Capitol. Of that experience, Norman left tangible evidence, authoring Washington’s Audacious State Capitol and Its Builders, in which he demonstrated its unexampled quality among our classically based capitols. He also founded The Capitol Campus Design Advisory Commission to protect that quality.

As associate dean of the college, he became something of a father figure for its students—and its young faculty as well. Thousands will remember the kindness and warmth of his counsel; many will remember his generous, pragmatic assistance as well. Fifteen names of architects from this region who have been of “genuinely extraordinary significance” are carved into the frieze of the College’s lecture hall. The name “Johnston” has been among them for many years.

Norman died on March 16 at the age of 96. The world is a better place because he lived, and is the less for his passing.