Nurturing innovation is the CoMotion commitment 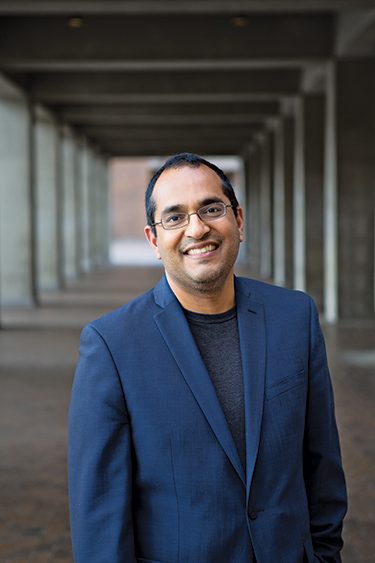 For his first six years at the UW, Vikram Jandhyala had no idea that the University helped faculty and students commercialize their ideas. And he was head of the Applied Computational Engineering Lab in Electrical Engineering. Less than a decade later as University of Washington’s first Vice Provost for Innovation, Jandhyala has a mandate of doing that, and more.

While the UW is known for its groundbreaking research, it has not been perceived as spry or supportive in leveraging the expertise of its faculty. Chris DeVore, a veteran investor and adviser in the Northwest tech community, describes the longtime model offered by the UW Office of Commercial Licensing as being primarily “interested in maximizing economic yield to UW,” a position that sometimes fostered an adversarial relationship with entrepreneurs.

But then in 2009, the University established the Center for Commercialization, or C4C, under the leadership of entrepreneur Linden Rhoads. It went a long way to rehabilitate this image and resulted in the rapid acceleration of patents and startups. A record 18 spinouts launched in 2014.

More than a year ago, the University’s leaders decided to appoint a Vice Provost of Innovation to further break down barriers between academics and innovation and “to nurture and support a culture with an innovation mindset in every field of study, whether business and engineering or social work and the environment,” says Interim President Ana Mari Cauce, who was provost at that time.

Jandhyala was “an obvious choice” for the job, adds Cauce. The faculty trust him as one of their own, as do the region’s entrepreneurs and tech leaders. When he learned of the job from the provost, Jandhyala couldn’t pass it up. “It was really attractive,” he says of the job. “I’m a generalist. I want to find common themes across disciplines. I want to use the lean startup model and support social work, health breakthroughs, and work with the environment.”

The son of two physics professors and a graduate of the prestigious Indian Institute of Technology, Jandhyala was primed for a career in a university setting. But as a graduate student at the University of Illinois, he saw how research and industry could be connected. After graduate school, a short stint in the private sector at Ansoft honed his appreciation for applied research. “The lab was collaborative at Illinois, but everyone was working on their own thesis,” he says “At [Ansoft] everyone had to work together to make the company succeed.”

Coming to the UW in 2000, Jandhyala developed a team of talented graduate students and obtained funding from the National Science Foundation, the Defense Advanced Research Projects Agency and the semiconductor industry, ideal conditions to run projects like a company would. “For us, the best way to test ideas was to put into the real world and work with early customers,” he says.

One of those projects—cloud-based electronic design simulation—earned enough customers and funding to prompt Jandhyala to take a three-year leave to found Physware (later renamed Nimbic) with six of his students. He remembers the excitement of buying the first table for their Bellevue office for $60. “We bought it, set it up, and it broke immediately.” The next significant table was for Ping-Pong, which turned out to be an essential resource for the whole office.

While seeking funding for the startup, Jandhyala met his future wife, Suja Vaidyanathan, ’97. An engineer with a Harvard M.B.A., she was working with a Seattle-based venture capital firm that became one Physware’s first investors. They now have two sons.

Serving as both CEO and chief technology officer of his company, Jandhyala quickly learned that marketing, networking and customer service were no less important than the quality of the technology. That lesson resonated upon his return to the UW in 2009, particularly as he was named chair of electrical engineering in 2011.

The centerpiece of Jandhyala’s new role is CoMotion, a rebranding of C4C in more than name alone. Beyond incubating new companies, Jandhyala wants CoMotion to be a highly visible collaborative hub for faculty and students. Though CoMotion does not offer a curriculum of its own, it does encourage and promote hands-on, project-based learning, particularly for undergraduates. “From the moment a student steps foot on campus as a freshman,” says Jandhyala, “we need to figure out how we can get them connected to like-minded innovators.”

Head of Product Design & Development Mike Clarke, who started at C4C in 2010, has noticed a shift: “I have a lot more engagement with students, especially undergraduates, and with parts of the UW community that weren’t in touch with our unit before (or hadn’t even heard of it).”

Beyond reshaping the student experience, Jandhyala envisions turning the University District into a technology hub. A first step is the recent opening of Startup Hall, a space on the ground floor of a building on Campus Parkway just a few blocks from Red Square. The joint effort of the UW Office of Research and CoMotion provides early stage companies office space and access to funders and mentors. Chris DeVore, whose startup accelerator Techstars is housed in the building, sees the U District becoming “the most interesting neighborhood in Seattle.” It should be one that grows organically over time akin to the business district that has grown around MIT in Boston’s Kendall Square. It would be a counterpoint to the rapid, and monolithic makeover of South Lake Union’s tech hub. “South Lake Union is a business win,” says Jandhyala, “but it’s not clear that it’s a societal win.”

As he envisions it, the city of the future not only uses smart technology, but solves real-world problems. The innovation mindset should not be limited to computer science, engineering or business majors. Inclusivity—whether in terms of discipline, race, gender or wealth—is not just the right thing, but also the optimal environment for finding creative solutions, says Jandhyala. “The creative energy of a team,” he notes, “is directly proportional to the amount of diversity on that team.”

A polymath who can communicate complex ideas, Jandhyala is well suited for the role of intellectual matchmaker. His relationships with Urban@UW, an effort to leverage the University’s resources to improve the well-being of cities, Startup Hall and the region’s technology industry would seem more than enough for him to juggle, but he will broaden the scope and infrastructure of innovation here. “One of the things I appreciate about Vikram as a leader is that he didn’t just come in with a goal of making things work more efficiently,” says C4C’s Clarke. “He came in with a vision for doing many new things. He thinks very differently about what our unit is, and the new direction is compelling.”

Jandhyala’s approach is partly a product of his curiosity. “Once you have a Ph.D., you can still learn new things in other areas,” he says. He admits he would probably be thinking of developing his next startup if he had not taken on this role as a leader for innovation university-wide. His recent experience in the business world makes it clear that only total commitment will suffice in making a new venture succeed. After reflecting for a moment on the trajectory of his new job, he quickly concedes that for partnering in innovation, “CoMotion is my startup.”