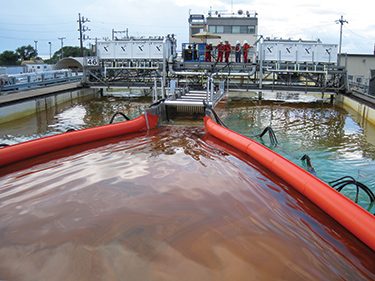 Two UW alums who helped devise a better way to ameliorate oil spills were part of a team that won a $1 million prize for its ingenuity.

Paul Smith, ’00, and Justin Morgan, ’02, work for The Glosten Associates, a Seattle marine engineering firm that partnered with Elastec, an Illinois-based company that earned the $1 million top prize offered by the Wendy Schmidt Oil Cleanup X Challenge. (Wendy Schmidt is married to Google CEO Eric Schmidt). Glosten and Elastec developed a grooved disc that powers through oil spills, sucking up oil at a rate of 4,670 gallons per minute. Smith and Morgan were at the heart of the design effort.

Teams participating in the challenge had to meet a target of 2,500 gallons per minute to place and turn their ideas into a functioning device in just 45 days, says Smith, who, along with Morgan, is a principal at Glosten, a firm of naval architects and marine engineers. Both men came to the UW for graduate degrees in Business (Smith) and Computer Science & Engineering (Morgan). Together, they designed the vessel that transformed the typically stationary, oil-skimming tool into a moving, oil-eating machine.

If it weren’t for the degree that Smith earned from the Foster School of Business, Glosten might have missed the opportunity. “My Foster background helped me build the case that sold the venture to my more fiscally conservative partners,” Smith says.