One historic week: King, Kennedy thrilled UW with visits in 1961 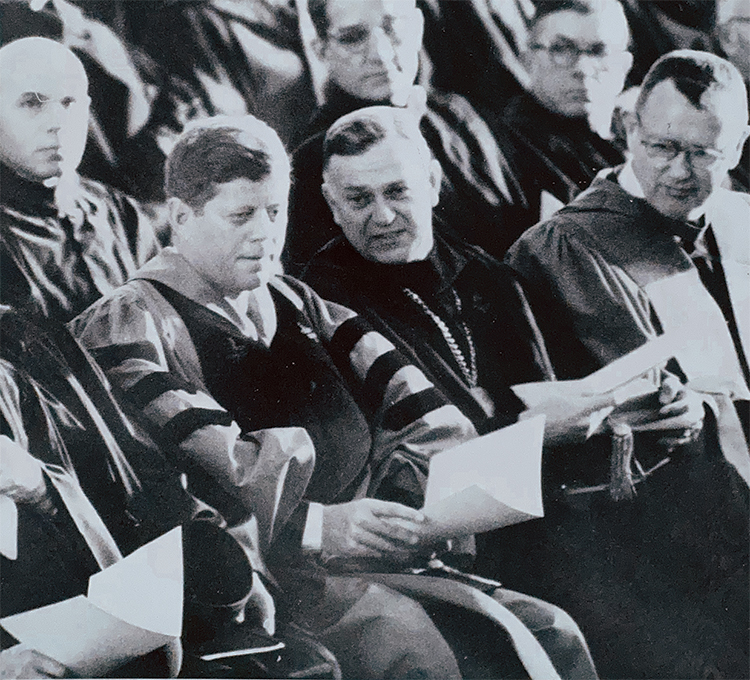 In the fall of 1960, John Edsall arrived at Sea-Tac Airport as an 18-year-old from Colorado, eager to carry on his family’s tradition of matriculating at the University of Washington. While waiting for his luggage, he had no idea that his UW experience would include attending two of the most momentous events to occur on the UW Seattle campus: visits by the Rev. Dr. Martin Luther King Jr. and President John F. Kennedy.

In the span of seven days in November 1961, the legendary civil-rights leader made his only visit to the Pacific Northwest. He came to Seattle to deliver three talks, including one at the UW on Nov. 9. One week later, during his first year in office, Kennedy traveled to the Emerald City to attend a grand ceremony honoring the UW’s centennial anniversary. That visit was due in part to two of the era’s most powerful U.S. senators, who happened to be alumni: Sen. Warren Magnuson, ’26, ’29, chairman of the Senate Appropriations Committee, and Sen. Henry “Scoop” Jackson, ’35, chairman of the Senate Energy and Natural Resources Committee.

King came to Seattle at the invitation of Rev. Samuel McKinney, pastor at Seattle’s Mount Zion Baptist Church and a Morehouse College classmate of King’s. At first, King was supposed to speak at First Presbyterian Church in Seattle because Mount Zion would not be large enough to accommodate the crowd that was anticipated. But First Presbyterian Church backed out, claiming construction work and other commitments prevented it from being available. (McKinney said the cancellation was due to racism.) So, McKinney arranged for other Seattle venues, including the University of Washington. 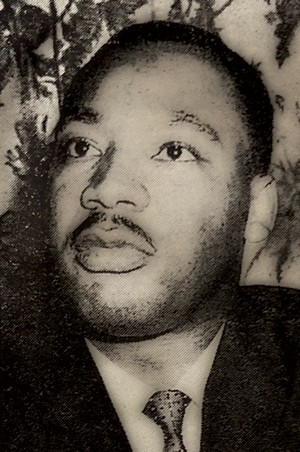 The Rev. Dr. Martin Luther King Jr. spoke to a full house in the auditorium at the old Meany Hall.

King, who arrived in town the night of Nov. 8 and checked into the Olympic Hotel, gave his first lecture the next day in the auditorium of the old Meany Hall before a capacity crowd of 2,000 students. Just 32, King received an enthusiastic welcome at UW. It was quite a change from the contentious greeting he received a few days earlier in England.

Edsall was among those giving the civil-rights leader a hero’s welcome. “Dr. King spoke without any notes,” he recalls. “He was a very good orator, and we gave him a standing ovation. All these years later, I still remember one line from his talk: ‘We’ve come a long way, but we’ve got a long way to go.’” After his UW stop, King spoke that evening at Temple de Hirsch, and the next day at Garfield High School at the Eagles Auditorium. A reception followed at Plymouth Congregational Church. In 1964, at the age of 35, King would become the youngest recipient of the Nobel Peace Prize at the time “for his non-violent struggle for civil rights.”

Students learned of the Nov. 16, 1961, University Centennial Convocation event featuring President Kennedy through small notices in The Daily and began to line up outside the Administration Building (now Gerberding Hall) at 5:30 a.m. for the 7 o’clock ticket giveaway. Inside beautifully decked-out Hec Edmundson Pavilion, some students sat so close to the podium that they could clearly see the colors of the president’s academic regalia (crimson, since he was a Harvard graduate). They also took in the colorful regalia worn by the procession of UW professors, administrators and dignitaries including the governor, U.S. senators and other officials and community leaders. A large U.S. flag was set up behind the stage.

During the president’s speech, he addressed the importance of education as well as the state of America’s international affairs, with an emphasis on the challenges of defending freedom and maintaining peace as a world power. Kennedy paid homage to the UW—which, he pointed out, was founded during the Civil War; no one could be sure in 1861 if the country would survive. As part of his plan to maintain peace and democracy in the world, Kennedy, in one of his first acts as president, asked Congress to establish the Peace Corps to recruit Americans 18 and older with college degrees to volunteer in the developing world for two years.

Little did the president know that the UW would become one of the nation’s most prolific providers of Peace Corps volunteers. (From its start in 1961 to 2020, when the pandemic forced the program to temporarily suspend operations and bring volunteers home, more than 240,000 men and women served in 142 nations.)

“I think this University and others like it across the country, and its graduates, have recognized that these schools are not maintained by the people of the various states in order to merely give the graduates of these schools an economic advantage in the life struggle,” Kennedy said. “Rather, these schools are supported by our people because our people realize that this country has needed in the past, and needs today as never before, educated men and women who are committed to the cause of freedom. So, for what this university has done in the past, and what its graduates can do now, and in the future, I salute you.”

November 1961 was an exciting time to be in Seattle, as Antoinette Wills, ’75, and John D. Bolcer eloquently point out in their wonderful book, “University of Washington: The Campus History Series.” “The future looked promising. Seattle was preparing to host the 1962 World’s Fair. The university was growing … in anticipation of the baby boom generation that would soon arrive. The university was being led by a man who would turn out to be one of its greatest presidents, Charles Odegaard.” And visits by King and Kennedy gave the UW community—especially students—an opportunity to see young leaders—Kennedy was 44, King was 32. It’s no wonder that students’ pride in their alma mater shines so strongly today.

Website: JFK Library, featuring President Kennedy’s speech at the University of Washington on Nov. 16, 1961, plus a transcript of that speech.