Our trophy shelf is overflowing 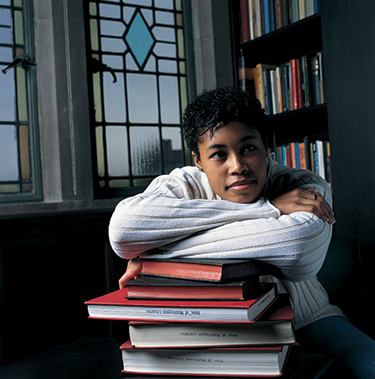 When we decide where the editorial content will go in the pages of this magazine, we always set aside one page for a list of awards and honors for the UW community. We call that section “Milestones,” but there is always a problem with that page, even though readers don’t know it. There isn’t enough room to list all the awards—or even to give many details on the achievements listed.

For example, in this issue we noted that Medicine and Genome Sciences Professor Mary-Claire King has been elected to the National Academy of Sciences, but we didn’t have room to add that the UW has 45 faculty members in this prestigious society—the most at any academic institution north of Berkeley and west of the Mississippi River.

In listing the names of our two Presidents Medalists, we described their majors and their future plans, but didn’t have space to write about their many UW achievements. Four-year student Elizabeth Gray, ’05, presented her research work at nine UW or national research symposiums, served for four years as a peer health educator and graduated with a 3.98 G.P.A. At the age of most college freshmen, transfer student Imai Jen-LaPlante, ’05, plunged into upper-level courses in math and physics. In two years at the UW she received two awards from the physics department and the English department’s Hilen Essay Prize — all this while achieving a 3.96 G.P.A.

One set of awards had to be dropped from Milestones entirely due to space, so we are running the list here instead. They cover the seven awards Columns won in two regional competitions for issues published in 2004.

The Western Washington Professional Chapter of the Society of Professional Journalists gave Columns five awards in its 2005 magazine competition. I received a First Place Award in Personalities for an article introducing President Mark Emmert, ’75. Free-lancer Brad Broberg won a Third Place Award in Science and Health Reporting for his feature on Charcot-Marie-Tooth disease.

UW Photographer Kathy Sauber won a Third Place Award in Photos-Portraits for her picture of Rhodes Scholar Allyssa Lamb. UW Photographer Mary Levin took home an Honorable Mention Award in Photos-Series for her pictures of the Wind River crane and old growth forests. And UW writer Nancy Wick received an Honorable Mention Award in Arts and Criticism for her article on dance preservation.

While finding the space to list all these awards may be a problem—it’s one we are proud to have at the University of Washington. And the way things are going at this remarkable institution, our problem is just going to get worse.