Peg Phillips waited a lifetime for her big break in acting 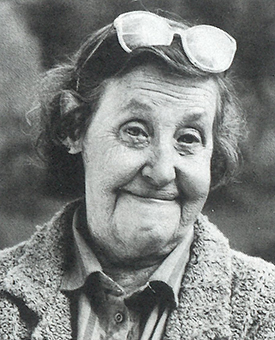 Peg Phillips—who plays the endearing shopkeeper, Ruth Anne, on the hit TV show Northern Exposure—hasn’t completed her UW degree yet. But, have no doubt, she will. Just as soon as her acting career allows her the time.

Even as a child in Everett, Phillips felt the call of stage and screen, and she grew up with the dream of attending the UW’s drama school. Unfortunately, Depression-era economics put her dream out of reach. She married a Navy man, later divorced, lived all over the country and raised four children. For 40 years, she worked as an accountant to support her family.

But Phillips never lost her optimism or her interest in acting. “I was enough of a detail person that I could be happy about two and two making four,” she says of her years as an accountant. Besides, she never forgot her father’s advice to “live every day as if it were your last on earth.”

For years she honed her skills in amateur performances with local drama groups and community theaters. Then, finally back “home” in the Northwest, Phillips, at age 65, enrolled at the UW School of Drama in 1984. She performed as Mom in True West her first year and fell in love with theater history under Professor Jack Wolcott. The experience, she says, exceeded her wildest expectations, and before long she was in demand as an actress.

With the help of an agent she found through the UW drama counseling office, Phillips began her belated professional career with regional TV commercials and bit parts in television movies and feature films including Chase, Dixie Lane, Dangerous Affection, Plain Clothes, Waiting for the Light and Dog Fight. But her big break came in 1990 when she was cast as the soft-hearted but feisty proprietor of the Cicely, Alaska general store on Northern Exposure. Originally hired for just one episode, Phillips has appeared in almost every show since the series began. The role is ideal for the energetic, 5-foot-3-inch brunette who acknowledges that she isn’t interested in roles where she would portray an apron-clad “cookie-jar grandmother.”

Indeed, more than the role is ideal. She likes the “reasonable stories” that the show tells, how it deals with social issues, and how the entire cast and crew (more than 100 people) work beautifully together. And conveniently for Phillips—who lives near Seattle—Northern Exposure is filmed in Roslyn, Wash.

Even with her success, Phillips still finds time for her pet project—a drama workshop program at Echo Glen Children’s Center, a correctional center for 10- to 20-year-olds who have committed major crimes. As founder and director of the program, she works with local teachers, directors, actors and drama students to introduce the residents to the performing arts.

“It is one of the few voluntary activities that these kids can choose,” she says, “and it allows them to learn cooperation and to try on different roles. We’ve worked with more than 300 kids and never had a major behavior problem. That says something about the power of drama.”

Now 73, Phillips shows no signs of slowing down. “I come from a long line of small, tough, hardworking Scottish people,” she laughs, “who just never die.”