Peppers protect themselves by adding spice 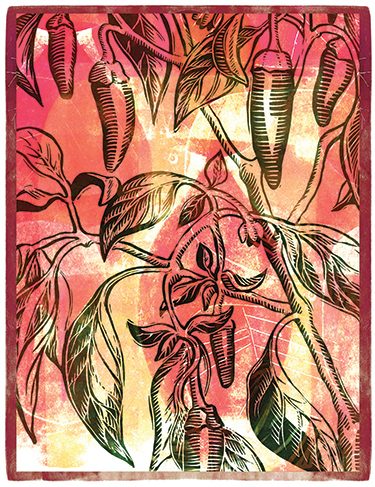 If you’ve ever eaten a chili pepper so hot you thought you would die, then you know what it feels like to be a pepper predator. Joshua Tewksbury, a UW biology professor, says death by spiciness is precisely what the pepper is going for.

In a recent study of wild chili plants in Bolivia, he and colleagues discovered that spice levels increase in peppers growing in areas threatened by fungus-carrying insects. The heat is the plant’s defense mechanism. Where there are more pepper pests, the plants pack more punch.

It all comes down to capsaicin, the heat-inducing chemical surrounding chili pepper seeds (think pepper spray). Smart bugs know better than to bite the capsaicin-rich peppers, which means they never introduce the fungus. Tewksbury says capsaicin is the perfect weapon for peppers because it specifically targets bugs and is harmless to birds. Birds are known to be beneficial friends to the pepper population because of the important role they play spreading seeds.

“For these wild chilies, the biggest danger to the seed comes before dispersal, when a large number are killed by fungus,” Tewksbury says. “Both the fungus and the birds eat chilies, but the fungus never disperses seeds; it just kills them. I think it is a great example of natural selection.”