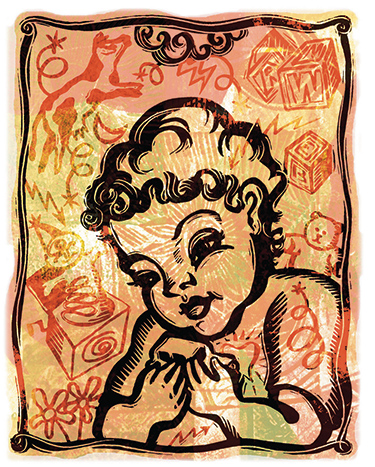 For the first time, UW researchers have confirmed that toddlers engage in “emotional eavesdropping”—changing their own behavior in response to an emotional exchange that does not involve them.

“This may be a precursor to ‘reading’ other people’s minds by understanding their emotional and psychological states,” says Psychology Professor Betty Repacholi.

Repacholi and Psychology Professor Andrew Meltzoff set up two ingenious experiments to track toddler behavior. In both, youngsters watched an adult manipulate a toy during playtime and then saw a second adult express anger or indifference.

If the second adult was neutral about the toy during playtime, the toddlers leaned forward, made noises and wanted the toy. If the second adult was angry during playtime but left the room afterwards or turned her back, the toddlers still wanted the toy. In these cases, they grabbed the toy within one second. They also imitated the first adult’s playing with the toy 2.5 out of three possible times.

But when the angry adult remained present and her neutral face was visible, the children hesitated, taking an average of five seconds to take the toy. They were only successful in imitating the first adult’s action half the time.

“Understanding other people’s emotions is a lifelong skill and is crucial for school readiness. The fascinating result of this study is how sensitive toddlers are to the emotional dynamics of the interactions around them. They don’t need to try out a behavior of their own and get rewarded or punished. They can watch what an older brother or sister does and learn from what happens to them,” says Meltzoff, who is co-director of the UW Institute for Learning and Brain Sciences and holds the Job and Gertrud Tamaki Endowed Chair in Psychology.

“This study helps fill in a missing piece, because it shows the children engage in emotional eavesdropping. Children have their emotional antenna up all the time and they learn from eavesdropping on the behaviors of others,” he adds.

The researchers found no gender differences in how the toddlers reacted. “This was a real surprise,” says Repacholi. “Parents usually socialize boys and girls differently and girls are usually more compliant. It may be that differences in this area will emerge later.”

The results were published in the March-April issue of the journal Child Development.