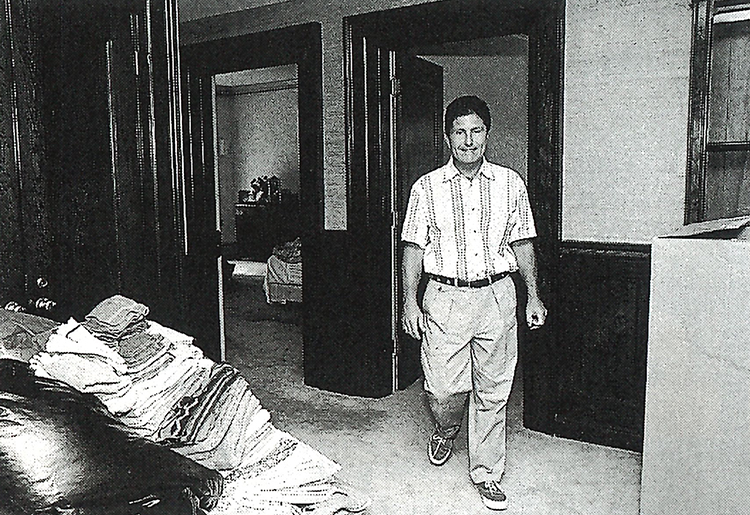 President McCormick gets settled in his new home, the President’s Residence, in Washington Park. Photo by Mary Levin.

Columns recently invited President Richard L. McCormick to reflect on his first year in office. The following is his report.

Last June’s splendid commencement ceremonies marked many kinds of ends and beginnings. For me, it was the end of my freshman year at the UW. The historian in me knows that my final grades won’t be in for a long time. But in other respects this was a fairly typical freshman year, full of new impressions, new demands, and new responsibilities, sometimes overwhelming, almost always exciting. Let me try to convey a little of what the year felt like.

It felt, first of all, extremely public. Understanding this aspect of the role is one thing; experiencing it is something else. Even when the president knows less about a subject than anyone else in the room (which is not exactly a rare occurrence for a freshman president), he is expected to have something to say, and what he says is given close attention and immediate semi-official status. Being thus constantly and publicly on the spot takes some getting used to, especially when one is keenly aware of all there is to learn.

Learning is certainly what the year was about. I tried very hard to get myself out to the places where the University does its work—classes, departments, dorms—and to listen to as many different voices as I could. People were wonderfully eager to talk and to help. What they mainly wanted from the new president, I found, was not promises and commitments but a chance to tell their stories—to make sure I understood the meaning and importance of what they did, in the context of this large and complex institution.

I can say now, after this year of becoming acquainted, that the University’s reputation, high as it is, does not do justice to the reality. I am tremendously impressed with the people I’ve come to know on this campus—the quality of their work, their energy and imagination and dedication, the programs of teaching, research, public service, and, yes, administration, they have created. This university can hold its own with any institution of higher learning anywhere. It looked very good from North Carolina, but it looks even better up close.

Another heartening perspective, in this introductory year, came from my travels around the community, the state, and indeed the country to visit with alumni, parents, political leaders, the press, and friends of the UW. One would not expect unanimity from this wide-ranging group, and I certainly heard strong and varied opinions about how the University should do its job. But the underlying respect and affection and concern for the UW were clear. That reservoir of good will—stretching from the Sons of Norway Hall in Poulsbo to White Swan High School in the Yakima Valley to Riverfront Park in Spokane—buoyed me up repeatedly and will keep me optimistic, through all the political ups and downs of piloting a great public institution in challenging times.

The big challenge became clear very early. It can be summed up in three words: quality, access, resources. In the face of a burgeoning student population and funding constraints at both the state and federal levels, we must somehow keep this distinguished university at the high level it has attained. 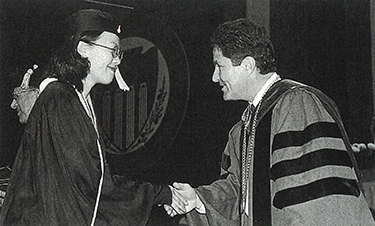 President McCormick greets one of the 9,245 UW graduates during the June 8th commencement ceremonies. Photo by Mary Levin.

In an ideal world, I would have finished my freshman survey course—”University of Washington 101″—before tackling this particular challenge. In fact, I had to learn and strategize simultaneously (as most people do in demanding new jobs). Thanks to the extraordinary quality of the academic and administrative teams Bill Gerberding left behind, we have taken some good first steps toward addressing the issues. I’m proud of our success in the supplemental budget session of the Legislature, and I’m proud of our new University Initiatives Fund, which gives us a systematic, collegial way of rechanneling some resources into new areas of opportunity. The cooperation of the faculty in establishing this fund was one of the greatest satisfactions of my first year.

One of the biggest surprises, I would have to say, was discovering that this exceptional faculty—on which the quality of the University absolutely depends—has never been compensated at the level of its peers and is today slipping even further behind. There are any number of statistical comparisons that make this point. For example, the average UW salary for associate professors—those rising stars most likely to be “raided” by other universities—ranks a dismal 19th on the list of our 24 institutional peers (public research universities with medical schools). Yet the UW leads all but three of those comparison institutions in the number of its top-10 graduate programs (according to the National Research Council).

Even a freshman president could see that this kind of disparity isn’t sustainable for very long. Either salaries will rise or quality will fall, the “Mount Rainier factor” notwithstanding. That is why we have made faculty salaries our number-one budget priority for the coming legislative session.

By great good fortune and, I like to think, a certain amount of astute management, the year passed with no real crises. The closest we came was the controversy over siting the new law school, and there I think a policy of patience, listening, and a full public account of the final decision paid off. 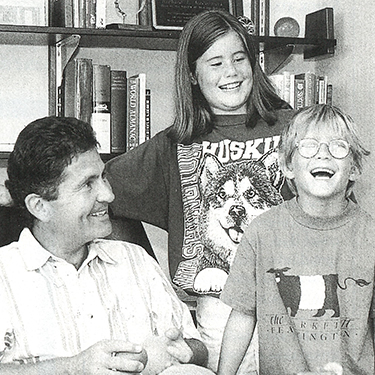 President McCormick unwinds as his new home with his children, Besty and Michael. Photo by Mary Levin.

On the debit side of the year I would have to list the failure to find a new provost—a great disappointment. But we did make stellar appointments to three other top posts—executive vice president, dean of the Graduate School, and dean of the College of Engineering—and I’m confident that the search for provost will have comparable success in the end.

More personally, the warm welcome this community has extended to my family and me would have made this year memorable all by itself. We have never lived in a major city before and have thoroughly enjoyed exploring all that Seattle and the region have to offer. It’s been a special pleasure to watch my two children settling into school, making new friends, getting involved in soccer, basketball, and baseball, and generally enjoying their new lives. They are not overly impressed, I’m glad to say, with Daddy’s new job, but they do enjoy giving impromptu tours of their personal quarters during official functions at the president’s residence.

As for the rain—well, yes, we noticed. It hit me for the first time in November, when each day seemed darker and damper than the last. By May, when I went back to the North Carolina Research Triangle with a joint study group from the UW and the Seattle Chamber of Commerce, the heat that was wilting everybody else felt wonderful to me. My climatic adjustment to the Northwest is definitely a work in progress.

Still, it’s been a very good year. Probably they won’t all be this good, but I feel ready now for whatever lies ahead and deeply committed to providing the best leadership I can to this extraordinary university.