Marking milestones along our journey. 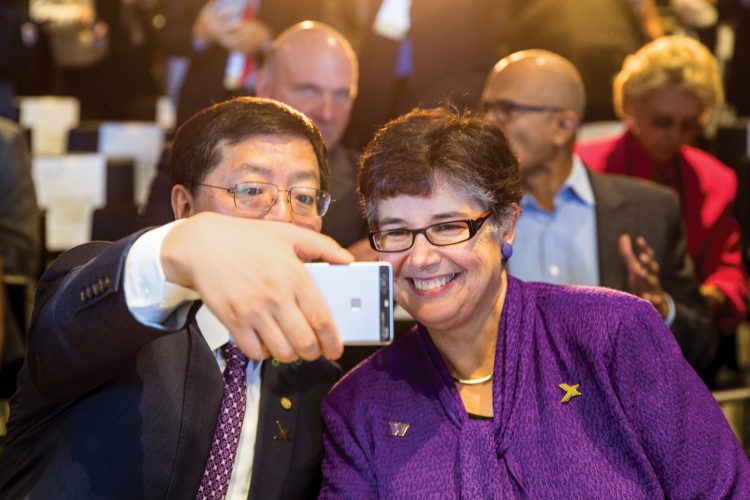 Tsinghua University President Qiu Yong snaps a selfie with UW President Ana Mari Cauce at the September grand opening of the Global Innovation Exchange building in Bellevue. The GIX partnership between the UW and Beijing-based Tsinghua creates a project-based graduate program in innovation.

Every significant journey is marked by milestones—moments when we note our progress, acknowledge how far we’ve come, and take stock of what still lies ahead. In the 31 years that I’ve been a part of the University of Washington’s journey, the milestones have been many, and this year we celebrate some anniversaries that say a great deal about who we are and the values that define us.

One of these milestones is the 10th anniversary of the Husky Promise. A decade ago, we made a promise to students from Washington that if they qualified for admission, the cost of tuition would not prevent them from earning a degree. Since then, the Husky Promise has helped more than 39,000 undergraduates attend one of our three campuses. Today, roughly 30 percent of our in-state undergraduates benefit from the program, thanks in part to your generous support.

This year, we also celebrate the 20th anniversary of the Global Burden of Disease, the world’s largest, most ambitious effort to understand global health. Through the leadership of the Institute of Health Metrics and Evaluation here at the UW, the GBD has united a worldwide community of diverse collaborators to gather and understand health data. The resulting knowledge and solutions has played a significant role in saving lives on a massive scale. In 1990, 11 million children younger than five died. Last year, despite a larger world population, that number had fallen to 5 million. That is still 5 million too many. But the GBD demonstrates that transforming population health is within our reach when we work together. Prioritizing that collaboration is a fundamental underpinning of our Population Health Initiative.

Looking back further, we celebrate 30 years of the UW’s First Year Interest Groups, or FIGs, a unique and special part of the Husky Experience that has enrolled more than 70,000 first year students since it began. If you were one of those 70,000, you might remember how reassuring it felt to have your own cohort of just 20 or so classmates who shared your interests as they started the college journey with you. In this sense, a large university with boundless opportunities can also feel personal and intimate. FIGs have been one of the most successful ways of creating that experience, forming communities and friendships that last for years, even lifetimes.

And looking still further back, the 50th anniversary of the founding of the Office of Minority Affairs & Diversity will take place in 2018. We recognize the trailblazing efforts of the Black Student Union and its supporters, who demanded that the University increase its commitment to diversity. Their efforts live on in OMA&D’s commitment to
excellence, diversity and inclusion in our campus communities.

So as I mark my own milestone, the beginning of my third year as president of this great public university, I feel enormous pride in what our community has accomplished, together. As alumni and friends, you are the reason we have come so far, done so much, and learned so richly. Thank you for all that you do—our adventure together has just begun.

Ana Mari Cauce is the president of the University of Washington.