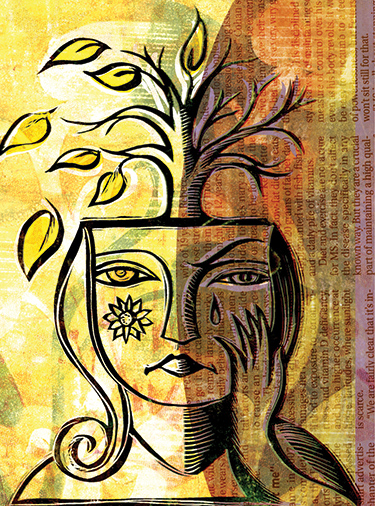 To Jennifer Stuber, the stigma associated with mental illness is black and white: that is, it’s right there in the newspaper.

Recently, the assistant professor in the UW School of Social Work led a study of mental health coverage in eight Washington newspapers over a 10-year period. “Often the primary news story that you read is a person with mental illness doing something violent to someone else,” she says. In fact, half the stories that she studied fit that pattern.

“I think it’s making a real difference in the kind of coverage we see,” says David Domke, chair of the UW Department of Communication. That is, journalists are beginning to question narratives that link mental illness with violence, and they’re writing more positive stories about treatment and recovery.

For example, in April, Scott Hewitt of the Vancouver Columbian penned a story about a formerly homeless woman with mental illness who, with treatment, was able to become an advocate helping others with mental illness. The piece won the coalition’s first annual Washington State Mental Health Reporting Journalism Award.

Now, Stuber is collaborating with Domke and other UW communications faculty on a proposal to expand the program nationally. They want to conduct additional research, analyzing not just news content but also journalists’ attitudes toward mental illness, and how media stories shape public opinion on the topic. They also envision a national website to be called Mental Health Connect, to serve as an information hub for journalists and a place for discussion with the mental health community. Today, Washington; tomorrow, the world.