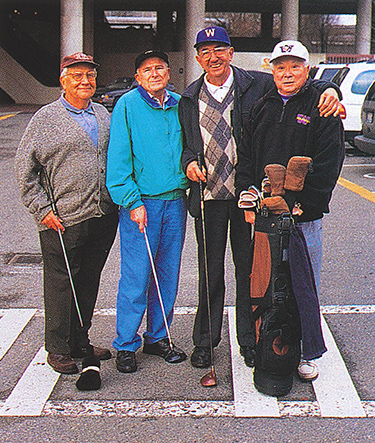 (From left) Les Mackoff, ’53; Dan Ellinger, ’53; Basil Grigoris, ’53; and Eugene Ko, ’53; stand in what used to be part of the third hole of the old University Golf Course-but is now the parking lot outside the emergency room at the UW Medical Center. The four retired physicians played the course while they were medical students in the early 1950s. Photo by Jon Marmor.

Cheers went up the day ground was broken in 1947 to build the new UW School of Medicine-except from some local physicians, who opposed the creation of the school, and some local golfers.

The Seattle golfing community was a bit sad because the school was being built on the grounds of the University Golf Course, a sweet, nine-hole layout that for 3 1/2 decades hugged more than half a mile of Portage Bay and the Montlake Cut.

The course was the home of the University Golf Club, and offered students, faculty and other University folks a chance to grab their sticks and whack the ball around for next to nothing. Carved out of an undeveloped landscape that-in 1912-was three miles outside of Seattle city limits, the 3,100-yard course started along Pacific Avenue for a few holes, then picked up across Montlake Blvd. E. and ran along the Montlake Cut, ending next to Husky Stadium.

The picturesque course did not lead an idyllic life, however. For years, S.E. Hayes, the owner of the Sand Point Golf Club, protested the fact that students and others could play on the “tax-free and rent-free” University course for little money (non-members paid 50 cents) while Sand Point members had to pay “hefty” fees at their course.

But the course survived the dispute. “We used to play every chance we got,” says Dan Ellinger, ’53, a retired orthopedic surgeon who attended medical school here from 1949-53. Admits Eugene Ko, ’53, a retired general practitioner who was Ellinger’s playing partner: “We cut class to play sometimes. It was a break from the tedium of medical school.” 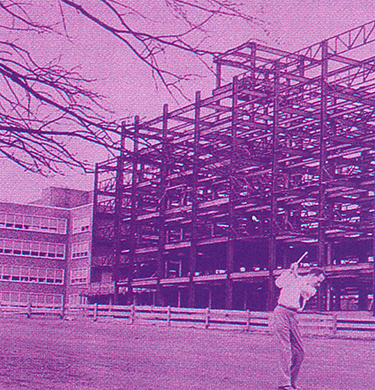 This 1950s golfer doesn’t let the construction of the Health Sciences Center distract him from his game on the UW Golf Course. Photo courtesy of UW School of Medicine Dean’s Office.

The course was doomed the day the University decided to build the school. It was the only open section of land on campus large enough to accommodate the planned medical, dental and nursing schools, health sciences complex and accompanying teaching hospital-as well as room for their probable expansion. Dr. Raymond B. Allen, then the UW president-elect, tried to save the course by proposing that the central part of campus house the health sciences . But the campus’ board of health sciences convinced him the waterfront was the best choice.

On March 5, 1947, groundbreaking occurred. Construction ate up most holes, but a few remained, and golfers were able to play against the backdrop of the new school’s steel skeleton.

“It was a good little course,” recalls Jack N. Lein, former health sciences vice president and recently retired as the UW’s director of federal relations. “I played it often. But there was no question something was going to happen to it.”

Cy Rubin, an enterprising UW professor of pathology, took over the clubhouse and turned it into a research facility. But by the early 1960s, with the further expansion of health sciences facilities, the course was no more.

“They could have preserved some of the course,” Ko says. “But that’s progress.”