Prolific volunteer honored for lifetime of vision and service 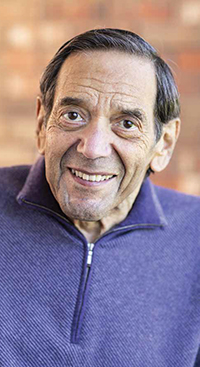 As a new attorney working for Washington state’s longtime U.S. Senator Warren Magnuson, Stan Barer, ’63, was already making his mark. He helped draft the bill that would become the Civil Rights Act of 1964—and then faced down opposition from segregationists to help get it through the Senate Commerce Committee (chaired by Magnuson, ’29) and the full Senate after months of filibuster.

On July 2 of that year, President Lyndon B. Johnson signed the bill into law.

Barer, who is Jewish and had already encountered significant discrimination himself by age 24, was quite pleased. But he was just getting started on a long career in politics and law that would embody his values: equity, inclusion and seeking common ground toward the goal of shared prosperity for all people. His more than five decades of support for the University of Washington would further reflect those values. Through philanthropic and strategic guidance and creating programs that connect people across countries and cultures, Barer brought the world to the UW—and the UW to the world.

In recognition of Barer’s generosity and vision, the UW Foundation has honored him this year with the Gates Volunteer Service Award—presented annually to individuals whose philanthropy and service have taken the UW to new heights.

Born in Walla Walla, Washington, at the outset of World War II, Barer quickly learned an unfortunate reality of his time that would affect his choice of career: “In those days, if you were Jewish, no one would hire you except a Jewish firm. I knew I had to be self-sufficient, and I thought law would give me the ability to make my own living.”

Barer set his sights on the UW with the goal of earning his Juris Doctor. With a law degree, it turned out, not only could Barer make a living—he could help break down national and international barriers. After he served as Magnuson’s chief of staff, Barer brought his legal expertise and global philosophy to the shipping industry, playing a central role in reopening trade between the U.S. and China.

Alongside Barer’s world-changing professional work, he and his wife, Alta, contributed decades of philanthropic service—especially through their support of higher education at the UW.

Stan brought his years of experience to bear at the University’s highest levels of volunteer leadership, serving as a regent from 2004 to 2012 and as a member of the UW Foundation Board. He also held volunteer roles with UW Law, UW Medicine and the Burke Museum.

Mario Barnes, dean of the School of Law, notes, “Stan was instrumental in developing a global vision for UW Law that continues today.”

On boards and committees, Stan helped shape the law school’s strategic plan and played a key role in helping the school surpass its $70 million fundraising goal in a campaign that concluded in 2008. The Barers’ support was instrumental in the construction of the home of UW Law—William H. Gates Hall, where future legal leaders have studied for nearly two decades.

“Education is the key to everything,” says Stan. “I believe that very strongly.” Alta did, too.

In 2019, Alta passed away after a battle with cancer, but she left an impressive legacy. Dedicated to local arts and health-care organizations, Alta also generously devoted time to bolstering higher education. She was a member of the ARCS (Achievement Rewards for College Scientists) Foundation Seattle chapter, a women-led organization that advances the transformative power of education and research; served on the Law Committee during the UW’s previous fundraising campaign; and, with Stan, hosted several UW events at their home—strengthening support of the University and encouraging others to get involved.

Putting your money where your heart is

Stan recalls of Alta, “She believed in putting your money where your heart was.” Together, the Barers did just that, promoting the UW’s mission across several disciplines.

Believing that a healthy planet improves lives everywhere, the Barers created an endowed professorship in sustainability science at the College of the Environment—helping the UW recruit and retain top faculty, and bolstering research and education in this essential field. The Barers’ generosity has also benefited student athletics, cancer research at UW Medicine, graduate science education and research through ARCS, and much more.

“Stan and Alta understood the power of a university to connect disciplines and advance learning through those connections,” says Kellye Testy, former dean of the UW School of Law.

Perhaps no gift more clearly illustrates this philosophy than the Barers’ 2010 creation of the Barer Institute for Law & Global Human Services. With a focus on how law can improve outcomes in health, education, economic development, sustainability and more, the Barer Institute offers 3-4 fellowships each year to midcareer leaders from developing nations. Coming from as far away as Indonesia, Nigeria and Colombia, Barer Fellows enroll in a unique interdisciplinary program in sustainable international development. With full scholarships, more than 25 Barer Fellows have continued their educational journeys at the UW, then returned to their home countries to work toward positive change.

“Before, I thought that our problems are only our problems,” says Ermek Mamaev, a 2018-19 Barer Fellow from Kyrgyzstan. “But after meeting friends from different parts of the world, I understood that actually the problems are similar. What’s more important is that there are common solutions to these problems—and what we can do is to learn from each other.”

As a reflection of Stan Barer’s lifework, it’s a philosophy he couldn’t have put better himself.