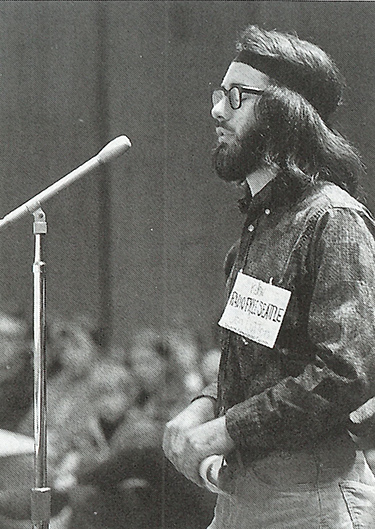 Radio Free Seattle spokesperson Jon Lutton testifies at a 1970 regents meeting in an attempt to save the student-run program. Photo courtesy of the Seattle Post-Intelligencer Collection of the Museum of History and Industry.

Today if you tune your radio to KUOW, the University’s public radio station, you get a steady stream of news and information from the award-winning staff and National Public Radio.

But at one point 30 years ago, you would have heard student voices urging the takeover of campus buildings and a raunchy John Lennon tune. On May 7, 1970, during a student strike following the invasion of Cambodia and the killing of four students at Kent State University, a group of about 50 students walked into KUOW’s studios in the Communications Building and demanded air time.

“A completely unexpected number of people was engulfing the KUOW area,” wrote then Station Manager Kenneth Kager in a memo to the UW administration. “All available studios, offices, and other rooms were occupied; and a headquarters had been set up in Room 326, a classroom assigned to the School of Communications.”

Some of these students had broadcasting experience and demanded to run the station as “Radio Free Seattle.” Kager was able to negotiate with the group, letting the students start with a 24-hour schedule and eventually trimming the air time down to an evening slot. Despite the occupation, he felt he was still in control. “KUOW had not been taken over through seizure by student strikers,” he wrote in his memo.

The students had a different perspective. “We were doing it 24/7, as they say nowadays,” recalls Jon Lutton, one of the members of the Communications Coalition that ran the programming. “There was a lot of news, primarily local news, call-in shows and rock music. Somebody from station management was there all the time. We were probably taking a fair number of liberties, but we were not out of control.”

Regular KUOW listeners used to Beethoven might hear the Beatles singing, “Why Don’t We Do It in the Road?” “We played that a lot,” says Lutton. “It seems tame now but the station manager came in all upset when we played it.”

As was typical for that era, there was no one person in charge of the radio revolt. “Decisions were done on a collective basis,” Lutton says. “It was a time when people were willing to step forward and give a little. The issues were clearer. We had all these people come in, fraternity people, sorority people, and it was great to see them blossom in their roles.”

Lutton wasn’t on the air himself. “I was in the back room, trying to organize the next group that was going on the air,” he says. There were on-air appeals, but unlike today’s fund drives, they were mostly asking for food or cigarettes. “There really was a lot of support. We were well fed,” Lutton says.

A few weeks after “Radio Free Seattle” started, spring quarter was over. “It wound into summer and many fewer people were interested. It had shrunk drastically,” Lutton says. Despite appeals to President Charles Odegaard and a presentation to the Board of Regents, their time was up. “Basically they waited us out,” he says.

Why didn’t the University send in police to remove the students or pull the plug on the station? In his memo, Kager stated, “It was my belief … that avoidance of even one more explosive spark for a few days weighed the scales toward an offer of controlled air time for a stipulated period.” But the stress of the occupation was so strong that during that time, Kager had a heart attack and was hospitalized.

Today students broadcast over another UW station, KCMU, and would have a hard time taking over KUOW anyway. Last spring the station moved from its quarters in the Communications Building to an office building on the “Ave.” The $4.5 million project tripled the station’s space, gave it full digital technology and a modern performance studio. The new equipment also allowed the station to stream live on the Internet. Security is much tighter, but the locks and intercoms are aimed at some of the Ave street life, not potential SDS leaders of the 21st century.

As for Lutton, he never got his degree. “I would have been Class of ’71 but I never finished my senior project and a couple of credits,” he says. A project manager at Seattle City Light, he says he likes to listen to classic rock stations and also tunes into National Public Radio, but not on KUOW. “I usually tune in their rivals, KPLU.”