Regal statue of Washington once was stuck in the mud 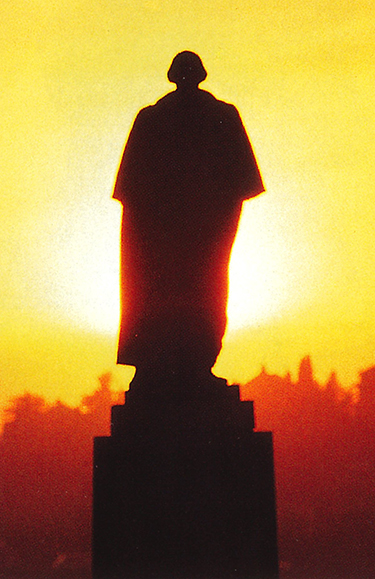 Our nation has always put George Washington on a pedestal—except for 18 years of humiliation at the University of Washington, where the Father of Our Country had his feet in the mud.

In 1905 the local chapter of the Daughters of the American Revolution (DAR) wanted to commission a heroic statue of Washington, the first ever erected west of the Mississippi. With the help of pennies from schoolchildren and a grant from the state legislature, the chapter financed a 14-foot bronze statue by American sculptor Lorado Taft.

The imposing statue was unveiled on Flag Day, June 14, 1909, during the Alaska-Yukon-Pacific Exposition. Taft was rather “anxious” about the placement: George sat on a 12-foot wooden pedestal at the 40th Street entrance to the fair.

“To my mind it is not George Washington’s business to be at the gate, shaking hands with the visitors—he doesn’t look it—but to be approached gradually at some conspicuous place far from the entrance, a spot where the rear of the figure would not be so easily approached as the front. … To bring him down makes him casual, commonplace,” he wrote.

Like many other “temporary” structures built for the fair, George’s pedestal stayed in place once the fair closed. But his wooden platform began to rot. In 1920 the statue was placed on ground level, balanced on railroad ties. The soggy Seattle weather often turned this resting place into mud.

The “temporary” grounding of George Washington dragged on and on, much to the chagrin of both Taft and campus leader Edmond Meany. According to newspaper reports from the time, Taft refused to visit Seattle for many years because his work was “in the mud.” Meany was angry that money appropriated by the legislature for a pedestal reverted to the general fund and could not be pried out of Olympia.

But students of that era didn’t mind having a close look at George. He was often the meeting place for dates or a rendezvous after studying at the library. He was also the object of several pranks. One morning in 1932 he was dressed up in a stovepipe hat and orange sash to publicize that season’s Junior Prom (the publicity chairman almost got suspended). The next year was the engineers’ turn. They built a huge surveying instrument and set up the tripod so that George was peering into the viewfinder. Authorities were not amused. 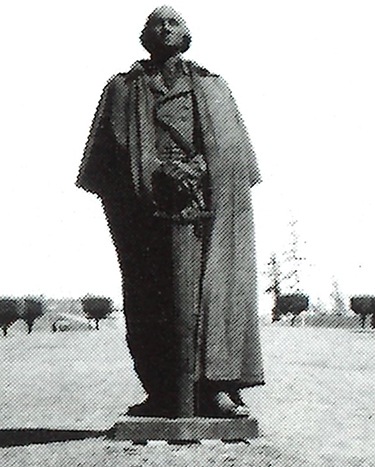 The Seattle Times devoted a long editorial to the “shameful” situation in 1935. “Since the decay of the makeshift material on which it stood, the statue has been literally grounded … for most of the time shown no more respect than would be paid a mass of junk. … University presidents have come and gone; scores of citizens have served as University regents. All the while George Washington remained ‘in the mud,’ unwanted, neglected, and by inference despised. The record is wholly shameful.”

Finally, Washington’s senators in Congress appropriated $21,281 for the Work Projects Administration to build a new pedestal. For a while it looked like George would go to the end of Memorial Way, but campus planners and the regents decided to move him to the end of Campus Parkway.

Built in 1938, the sandstone pedestal is 24 feet high, exactly the height originally requested by Taft. It was dedicated on Feb. 22, 1939, with a stirring speech by then UW President Lee Paul Sieg on the ideals of President Washington and the threat of fascism in Europe.

On every Feb. 22 those ideals are rededicated by the DAR members who lay wreaths at the foot of George’s pedestal. But students haven’t given up their traditions either. One morning last year you could catch George wearing a Bart Simpson mask.