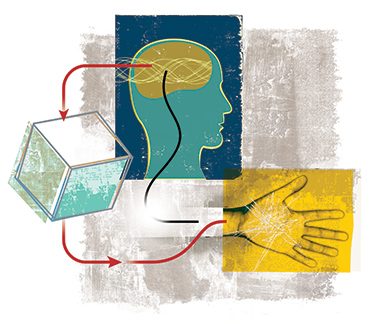 A pair of monkeys playing a video game may have contributed to one of the year’s most significant medical breakthroughs. Aided by external wires that rerouted signals from their brains, two macaques regained control of their paralyzed wrists and played a simple video game.

This result, published Oct. 15 in the journal Nature, could lead to devices that allow people paralyzed by spinal-cord injuries or strokes to use their arms and legs again.

The UW researchers harnessed the activity of individual neurons in the motor cortex, the part of the brain that normally controls limb movement, to stimulate muscles directly. They used an artificial connection to bypass the point of paralysis and restore voluntary movement to the paralyzed wrists. The monkeys, whose arms had been temporarily paralyzed with a local anesthetic, learned to use stimulation from arbitrarily chosen motor cortex cells, delivered to multiple muscles, to flex and extend their wrists and play the game.

The researchers found that a single brain cell was sufficient to get the wrist moving again — even if it wasn’t a cell related to wrist movement. “Nearly every motor cortex neuron we tested in the brain could be used to control the stimulation of the wrist muscles,” says Chet Moritz, UW senior fellow in physiology and biophysics and a lead author on the study. With practice, the monkeys became better video gamers as they learned to use different neurons to trigger muscle stimulation.

Researchers may someday be able to improve the lives of stroke patients by using stimulation from undamaged areas of the brain to restore function to damaged areas. Future applications could also help paralyzed patients press buttons, turn dials or hold objects such as a cup. The scientists predict it will take at least five years of additional research before direct stimulation of muscles from brain cells can be tried on human patients.