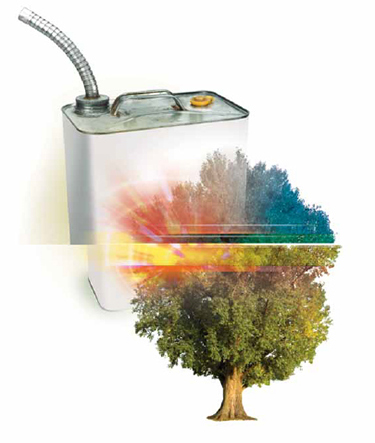 Poplar trees grow big and fast. They make great privacy screens, and poplar wood is used to make chopsticks and even the backs of stringed instruments like the viola. Now imagine this: within the next few years, the jet you take from Seattle to New York may be running on poplar-based jet fuel.

The U.S. Department of Agriculture awarded the University of Washington a $40 million grant to turn woody biomass—mainly poplar trees—into biogasoline and renewable aviation fuel. The grant will help develop a biofuels industry in the Pacific Northwest, western Montana and northern California. Until now, the Midwest has dominated the biofuels industry by producing ethanol made from corn.

Washington State University also received a $40 million grant that aims, among other things, to develop a regional source of renewable aviation fuel for Seattle-Tacoma International Airport. Agriculture Secretary Tom Vilsack came to Seattle in September to announce the grant awards.

“These grants will help us develop our own regional industry and create jobs,” says Richard Gustafson, ’77, ’82, principal investigator of the UW-led grant and a UW professor of Forest Resources. “For the UW-led grant alone, a successful demonstration project over the next five years will lay the foundation to build five commercial biorefineries and cultivate 400,000 acres of poplars, resulting in 1,500 direct jobs, mostly in rural areas.”

Gustafson notes that this kind of integrated, big-project research is what the UW’s College of the Environment was created to foster. UW’s particular part, he says, is to assess the sustainability of the enterprise to make sure there are no unintended consequences.

“Woody biomass is a great resource for the region to develop a biofuels industry, reducing both greenhouse gas emissions and dependency upon imported oil,” says Lisa Graumlich, dean of the College of the Environment.

The UW is leading a consortium of businesses, universities and other organizations to work throughout the biomass supply chain to promote the financing, construction and operation of multiple biorefineries. Helping small to medium-sized landowners understand if and how they should grow woody biomass for the new industry is part of the UW project.

The key industrial partners are GreenWood Resources, Portland, the largest grower of poplar trees in North America, and ZeaChem, of Lakewood, Colo., the developer of a cellulosic biorefinery system that produces advanced fuels and chemicals. Emphasizing commercialization and sustainability, and ensuring that biorefineries and their feedstock are considered in tandem, makes these USDA grants different from past incentives and funding, UW’s Gustafson says.

Tom Hinckley, ’71, director of the School of Forest Resources, has high praise for the collaborative aspects of the project. “Rick Gustafson has put together an incredible team built on existing long-term multi-institutional collaborations that have expanded to include new partners. The School has long explored ways to take advantage of the region’s woody biomass. Now with Rick Gustafson’s remarkable leadership, the potential for producing biofuels from them is about to be realized.”