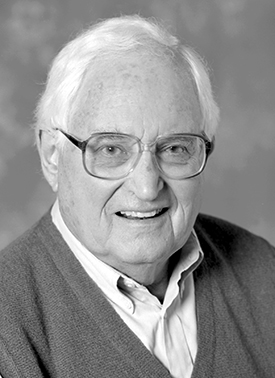 Last year’s presidential election focused unprecedented attention on American political systems. In the aftermath of the election, a lot of Americans discovered how little they knew—and how much they cared—about political institutions.

Don Matthews, retired chair of the UW’s political science department, has been fascinated by American politics for most of his life. Growing up during the Depression, the New Deal and World War II, he and his family talked about politics at the dinner table.

By the time he came to the UW in 1976 as chair of the Department of Political Science, he was already a well known author. His 1960 book, U.S. Senators and Their World, changed the way his field was researched and taught. “I looked at political institutions not from the perspective of rules and structure, but what people actually do and why,” Matthews says. “There are a lot of unwritten rules and folkways.”

After 20 years at the UW, Matthews retired in 1996, but his passionate interest in political institutions continues. Last October, he donated $800,000 for an endowment in the Department of Political Science to support teaching and research on American government. It is believed to be the largest faculty gift ever made within the College of Arts and Sciences.

“Because of my experience as chair, I knew the department needed more support for faculty and graduate students,” says Matthews. “You have to be able to reward your best faculty if you’re going to keep them, and recruiting top students is a bit like competing for football players. I had inherited stock from my parents and grandparents, and the boom in the market made this gift possible.”