Renovating the Palazzo Pio, pictured at right below, which has been the UW’s home in Italy since 1985. 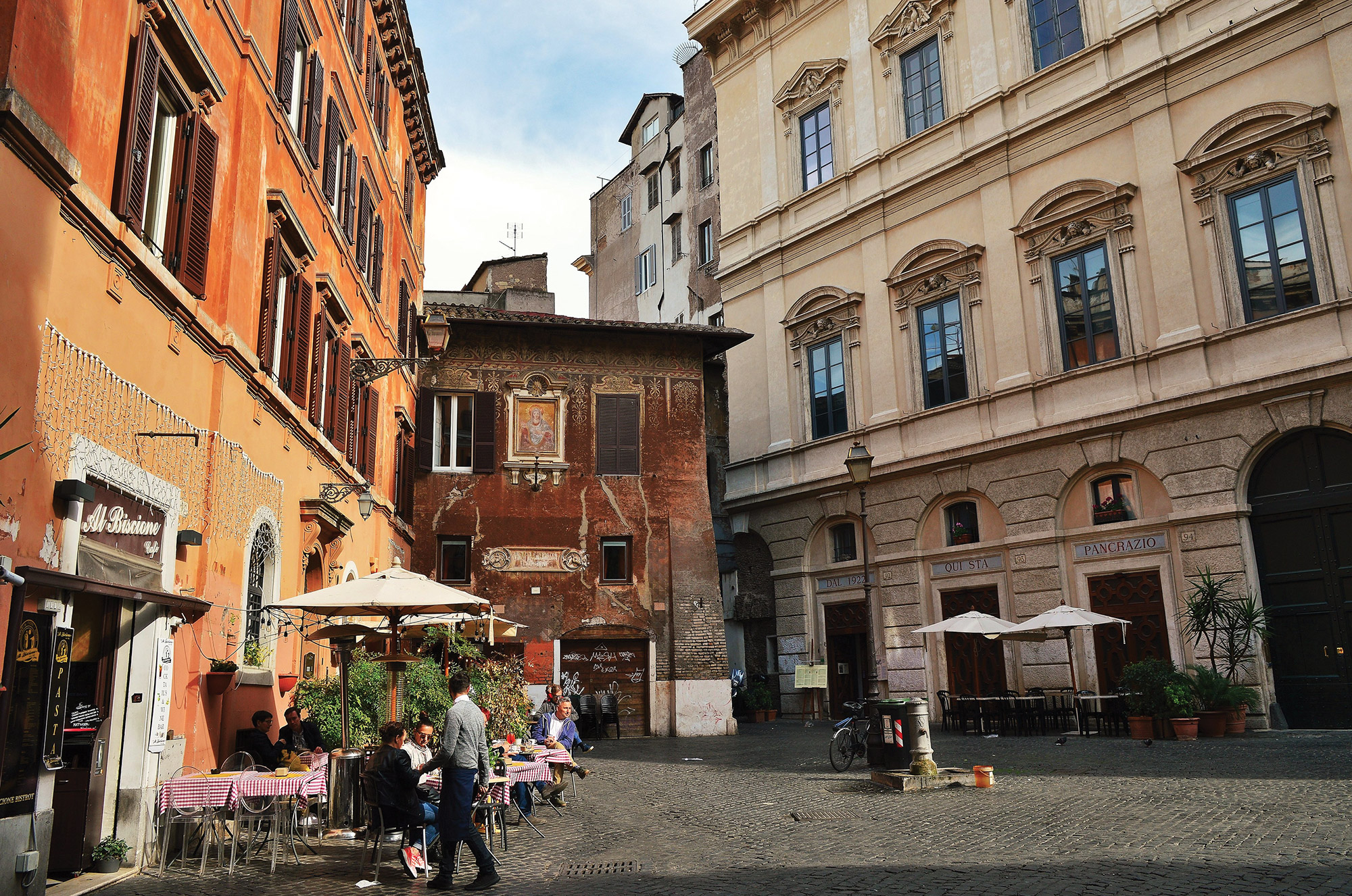 One of Patrick Ringland’s favorite memories is of sitting in a classroom in the Palazzo Pio in the center of Rome. The students are reading a Latin text describing an elaborate Roman dinner party. “It was hot, and the Campo de Fiori [a square filled with restaurants and market stalls] was just outside the window,” he says. “You could smell the very same ingredients wafting in.”

As a student at the UW’s Rome Center in spring of 2003, Ringland was dazzled by the history-rich city. He and his classmates spent their evenings exploring or sometimes just kicking a soccer ball around the lively Campo after dark. “You have this living classroom around you. There would be a third-century B.C. pillar stuck in a medieval wall on a 20th-century apartment building,” he says. “It was just so cool.”

And the Palazzo Pio, the building everyone calls “the Pio,” was the heart of it all. The palatial 15th-century building with a 16th-century facade fronts a small cobblestone piazza in one of the city’s most vibrant neighborhoods. For the past 35 years, it has been the site of the UW’s Rome Center. Now a three-year project is underway to update the structure to serve students and faculty for decades to come.

Every inch of Rome has its history, but the Pio is in a particularly historic place, says Alain Gowing, a classics professor who first brought students to Rome in 1988. Swiveling his chair in his Denny Hall office, Gowing calls up an illustration of ancient Rome on his computer screen. He points to the site of Julius Caesar’s assassination, which took place at one side of a theater complex that once covered the area of the Pio and much of the neighborhood nearby. “There’s where Caesar was killed,” he says. He moves his hand to the opposite end of the ancient complex. “Today, that’s the site of the Pio.”

The connection between the UW and Rome dates to 1970, when Professor Astra Zarina, ’53, started bringing her architecture students to Italy to study and work on restoration projects, says Professor Emeritus Tom Bosworth, former chair of the School of Architecture who also taught classes in the Pio. In the early 1980s, Zarina lit upon the building as a home for herself and as a site for architecture classes. At the time, several floors had been abandoned. Zarina made a deal to rent the floors for a reasonable price, and in return, the University would fund and lead renovations and repairs.

“She and her students, as a class project, developed a design to accommodate the architecture department’s needs and more,” says Bosworth. They designed studios, an office, a library, bathrooms and faculty apartments.

“She did things frugally, but beautifully,” says Gowing. “Simple things like the shutters in the windows were spectacularly beautiful. If something was old but still serviceable—like a 17th-century door on an apartment—she used it.”

Zarina had found and furnished the perfect spot. Like Rome itself, the Pio is magical, according to generations of students and faculty. It opened in 1984 with a focus on architecture and classics, and expanded its offerings in the 1990s to include business, art, food, politics and English.

“To be able to take students there was an unbelievable privilege,” says Gowing. “It is amazing that we have that facility. It’s a real jewel in the crown of our study-abroad programs.”

Today, the center includes a large conference room with a fresco on the ceiling, classrooms, a small library, offices and a few apartments for faculty.

Despite several updates and renovations over the decades, it now needs a deeper restoration, says Amity Neumeister, the resident director of the Pio. The renovation broke ground in January and work is expected to continue through fall of 2022.

“This is an amazing, outrageous, beautiful space,”says Neumeister.“But it needs a lot of love and attention so it can be great again.”

Hannelore Sudermann is the managing editor of UW Magazine.