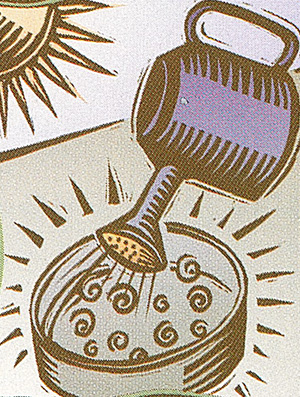 When a cancer patient undergoes intense chemotherapy or irradiation, fast-growing cancer cells die, but so do other cells, such as those that grow hair and those that make blood.

Only one in every 100,000 bone marrow cells is a stem cell that can produce blood. Because they are rare, large numbers of stem cells must be transplanted in order for some cancer treatments to be successful.

Until now, blood stem cells could not be multiplied outside the body. But a team of UW scientists, working at the Seattle Biomedical Research Institute, has found a way to grow stem cells from mice in the laboratory, opening the door to helping cancer patients overcome major side effects of treatment and creating greater possibilities for genetic cures of illness. Researchers at the Veterans Administration Medical Center also participated in the breakthrough.

By using a new growth hormone and optimizing cell culture conditions, UW scientists have generated large numbers of mouse blood stem cells in the laboratory and maintained them for up to four months. They have also transplanted these cells into mice after destroying the animal’s own bone marrow.

“It’s now almost a year later, and these animals are walking around as healthy as they can possibly be. We can’t find anything wrong with them,” says Pathobiology Professor Stephen Bartelmez. “The implications of this are huge.

“Using the new method, doctors might remove stem cells from a patient, and multiply them in the laboratory while the patient is receiving chemotherapy,” Bartelmez says. The next tests will be done on stem cells from primates and then human trials will follow.