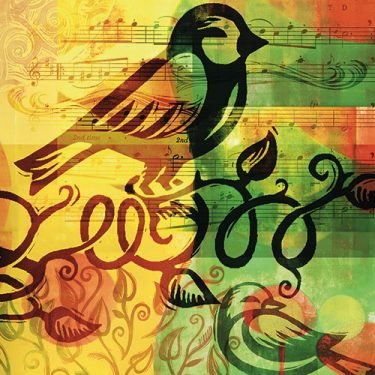 Warblers do it, sparrows do it …

Learn to sing, that is. Most kinds of animals make sounds purely by instinct, but songbirds are one of only a few groups of creatures that have to learn how to communicate with their own kind. As a result, scientists have often looked to birdsong as a model system for understanding how humans learn to speak.

Until recently, song learning had mostly been studied in the laboratory. UW Professor of Psychology and Zoology Michael Beecher wanted to understand the social dimensions of learning how and from whom birds learn to sing in the wild. So he and his students began tramping through the thickets of Seattle’s Discovery Park to find out.

The researchers outfit young male song sparrows (Melospiza melodia) with tiny radio transmitters, then track their subjects through the underbrush for months as the birds grow up, learn to sing and establish territories of their own.

Surprisingly, young birds don’t necessarily learn their songs from their fathers. Instead, they fly about and eavesdrop on the adult males in the neighborhood. Chris Templeton, one of Beecher’s graduate students, has found that a typical juvenile visits the territories of at least 20 adult males and listens to 200-some songs.

From this experience the young bird will choose his own repertoire of 6 to 12 songs, usually drawing on tunes from several different neighborhood males. Knowing the same song as a rival and being able to mimic it may help birds in territorial battles. But exactly how the birds choose their set list remains something of a mystery. Why one song and not another from a given rival male? For now, only the sparrows know.