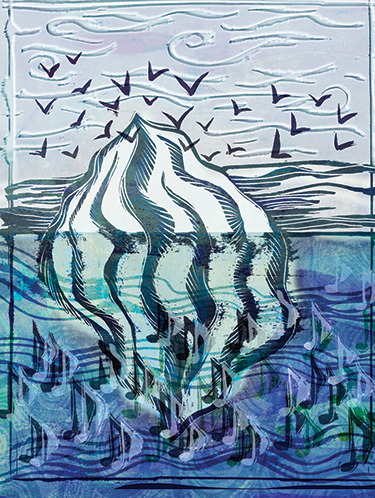 We love the enchanting songs of whales, the clicks and squeals from porpoises. And now, a University of Washington oceanographer has brought us more melodies from the deep. Only this time, the sound is of the shattering of an iceberg located near Antarctica’s Cape Adare.

This iceberg—measuring 76 miles long and 17 miles wide—sped toward an underwater shoal in 2005 when it collided, shattering into several pieces in just five hours.

The strange song was recorded 700 miles away by seismic equipment at the South Pole, surprising scientists about how far the sound of the breakup propagated, said Seelye Martin, UW research professor of oceanography. He was the lead author of a paper about the event that was published last year in the Journal of Geophysical Research.

The sound file of the event was compressed by a factor of 200 so the event can be heard in less than two minutes, according to Martin.

The wind-like, whistling sounds are the harmonics created as the iceberg sticks and slips over the shoal. Listen as the cracking sounds build—that’s probably fractures propagating through the iceberg like an ice cube fracturing when put in a glass of water—and then a sharp shot. The eerie moaning sounds are probably from the resulting pieces of ice rubbing against each other.

To listen to the iceberg crash, go to http://www.washington.edu/news/articles/iceberg-snaps-produces-strange-song.