Sometimes, starting over is for the best 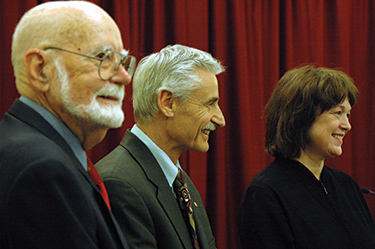 For the editor of a quarterly alumni magazine, October may be the cruelest month of all. In that month, the Nobel Prize judges announce their winners. This comes weeks after the final deadline for copy in Columns and other quarterlies with similar publication dates. The first time I had to tear up the layouts of this magazine came with the premiere issue of Columns, when the UW had its first Nobel Prize-winning faculty member, Physics Professor Hans Dehmelt.

In 2004 we again tore up our “Briefings” section when the news came that Linda Buck, ’75, shared the Nobel Prize in Medicine or Physiology for her pioneering research on the sense of smell. That morning I rushed to the Fred Hutchinson Cancer Research Center and found three Nobel laureates standing together at the press conference: E. Donnell Thomas, Lee Hartwell and Linda Buck, all members of the “Fred Hutch” staff and UW faculty.

At that press briefing, I learned that Buck, a Seattle native, arrived at the UW in 1965 but did not get her degree until 1975. She all but completed a psychology major, then stopped school for a while. When she came back, she added a degree in microbiology.

After the meeting, I thought about the chain of events that led Buck to delay her graduation until she found her true calling. Taking 10 years would not please accountability experts, who often complain about graduation rates at colleges and universities.

The University of Washington has the highest graduation rate among all public universities in the state: 74 percent of all undergraduates receive their degree after six years of study. The national rate at similar research universities is 62.5 percent.

To some, that is too long. In the past there have been proposals in Olympia that would penalize a “loitering student” who takes longer than five or six years to get a degree. Some lawmakers want to charge resident students out-of-state tuition after a set time period or a certain number of earned credits.

But what these efficiency experts fail to recognize is that education is not a manufacturing process. It can seem messy and wasteful, but it also transforms lives. The system forgives false starts and changes in direction, and we should all be grateful that it did while Linda Buck—and the rest of us—were undergraduates.

Next October, if someone from the UW gees an early-morning phone call from Stockholm, I will have to redo the layouts for the next issue. But I won’t be complaining, I’ll be celebrating. It’s fine when your original plans go smoothly, but once in a while you’ve got to tear up your pages and start over again.