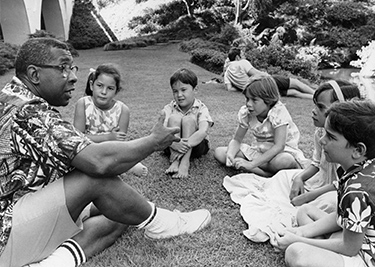 Spencer G. Shaw, a University of Washington professor emeritus of library science who was a nationally recognized storyteller and advocate for children’s reading, died June 16. He was 93.

Shaw, who served at the UW from 1970 to 1986, researched and taught legions of students about such topics as multicultural materials for children and young adults, library service to special populations, and library services and programs for the aging. But his storytelling also set him apart.

“When you speak of storytelling, many people relegate it to the nursery,” Shaw once said. “I use storytelling as an important means of sharing cultures of the world. I use storytelling for all age groups, regardless of how young or how old they may be.”

His work led the UW to name a lecture series in his honor. For the past 10 years, the Spencer G. Shaw Lecture Series has invited well-known children’s book authors and illustrators to the UW Seattle to give presentations.