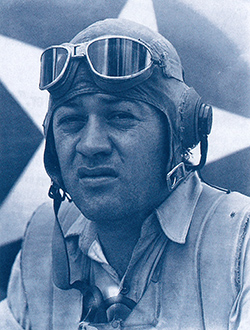 World War II ace Gregory “Pappy” Boyington, ’34, is one of six alumni to be celebrated in a new campus memorial to Medal of Honor recipients.

One year ago, when the UW Student Senate tabled a motion to honor Gregory “Pappy” Boyington, ’34, with a memorial recognizing his service during World War II and his Medal of Honor, students and the University suffered from a torrent of bad press and angry e-mails.

Lost in the uproar, according to ASUW President Cullen White, was the reason behind the blocked resolution. “People wanted it to be more inclusive. Any memorial should name all the Medal of Honor recipients who came to the UW,” he explains.

Last April the Student Senate passed a resolution urging the creation of such a memorial and now ASUW leaders are launching a $100,000 fund drive to make it happen. The memorial committee has already chosen a site near the UW’s World War II Memorial, at the bottom of the steps between Odegaard Library and Kane Hall.

During the fund-raising effort, the UW will be the first university in the nation to host “Visions of Valor,” a traveling exhibit on the Medal of Honor and its recipients. The free exhibit will be in the lobby of the Allen Library from April 3-26.