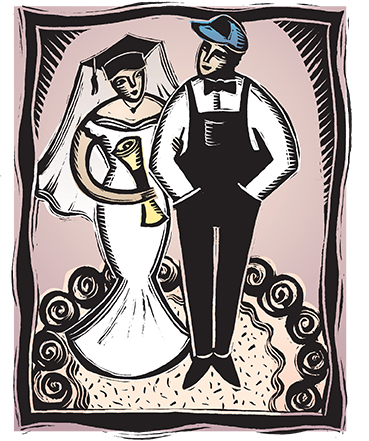 Throw out the old stereotype of the career woman with advanced degrees leading the life of a single. A new UW study finds that higher education is not the hindrance to marriage and motherhood it once was.

As recently as 1980, the more years of graduate school a woman had completed, the less likely she was to be married later in life. But this difference is fast disappearing, according to a study by Economics Professor Elaina Rose.

“There used to be a marked tradeoff between higher education and marriage,” Rose says, “but that is no longer the case.”

To document the dramatic shrinkage in what Rose calls the “success gap” during the 1980s and ’90s, she analyzed millions of census records and tracked the education and marriage status of Americans in the 40-44 age group.

In 1980, a woman in the 40-44 age group who had completed three years of graduate school was 14 percentage points less likely to be married than a woman with only a high school diploma. By 2000, that 14-point difference had melted to 5.

Rose was initially surprised by her findings.

Conventional wisdom has it that women tend to “marry up” — they marry men who are more successful, a phenomenon known as hypergamy. With increasing numbers of highly educated women flooding the “marriage market” in the 1980s and ’90s, Rose expected to see fewer of them finding mates. Instead that tendency evaporated over the two decades.

Does this mean that marry-up theory doesn’t work? “Not at all,” Rose says. “It means that the market is adjusting to accommodate the increased supply of educated women.

“The very nature of marriage is changing,” she adds. “It has become less about what economists refer to as ‘specialization and exchange’ — wife taking responsibility for the home while the husband brings home the bacon — and more about shared roles and commonality of backgrounds.”

Another factor is that the overall decline in marriage is concentrated among the less educated —especially for men.

Rose also tracked whether highly educated women have fewer children. She found that, while there is still a significant “motherhood success gap,” that gap is shrinking, too. “The perception that women face a stark choice between career and family,” Rose says, “is becoming less accurate in each successive decade.”

Rose’s research was funded by the National Institute of Child Health and Human Development.