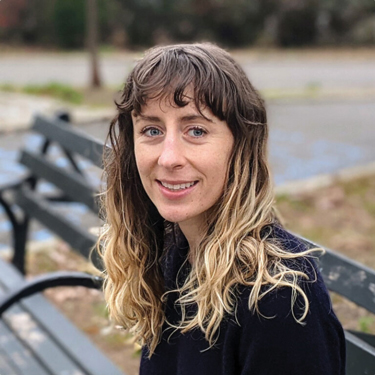 Audrey Quinn’s innovative editing skills helped tell the story of David Luis ‘Suave’ Gonzalez, who was sentenced to life in prison as a juvenile.

In May, Audrey Quinn was visiting a friend’s apartment when her pocket started vibrating. And vibrating. She tried to ignore it, but then, with apologies, she pulled her cellphone from her jeans.

“Did you just win a Pulitzer?” someone texted. As far as Quinn knew, no. She wasn’t even aware that a podcast she had worked on was nominated. But after a few seconds and a few more texts, she realized that “Suave,” the series about life prison sentences for juveniles, a series that she spent nearly a year editing, had won in the Audio Reporting category. “There I was just sitting on the couch with my 2-year-old playing in the other room. It was just such a weird, surreal moment,” she says.

Quinn, ’07, came to the UW to study neurobiology. She was drawn to the field because understanding the mind seemed like an elevated pursuit. “But I struggled through it,” she says.

After college, she realized “I really enjoyed talking about the science behind how our brains work, but I didn’t thrive in the day-to-day research.” While doing lab work, she tuned into “Radiolab,” a science podcast known for its sound design, and “This American Life,” a public radio show. She loved the format of those shows.

She obtained free training at Bellevue College’s radio station in exchange for producing stories. That led to an internship at KUOW and to Quinn finding her calling. It was time to move to New York.

Quinn’s science background and reporting experience landed her with CBS’ SmartPlanet. She later worked as a guest reporter for NPR’s “Planet Money” and found a full-time position with New York Public Radio. At the same time, she worked as an independent contractor and started teaching journalism at New York University.

In 2019, Futuro Media invited Quinn to join a major project: Reporter Maria Hinojosa, an Emmy Award winner, had been interviewing David Luis “Suave” Gonzalez for 25 years. Gonzalez had been sentenced to life in prison as a juvenile. In 2012, a Supreme Court decision allowed him to be released after 31 years. The podcast explores his journey through the criminal-justice system and his adjustment to life on the “outside.”

Quinn had already done some reporting about imprisoned people and was eager to join the team. She met the producers, including Hinojosa, who was deeply invested in Suave’s story. Quinn brought the innovative editing skills she developed on the crest of a growing podcast industry. The team started building the podcast in October 2019 and didn’t finish until summer 2020. “We made it, and because we had the time and everybody was so invested in it, we remade it,” says Quinn, who recalls walking around her Brooklyn neighborhood listening to version upon version as she fine-tuned it. “The team was so strong, and the tape was so strong,” she says. “We kept it really immersive in Suave’s journey and snuck in a lot of facts and numbers and history.”

Although she has won a Pulitzer, Quinn’s life has changed “very little,” she says. “It feels really good knowing that something I worked on was recognized on this huge stage.”