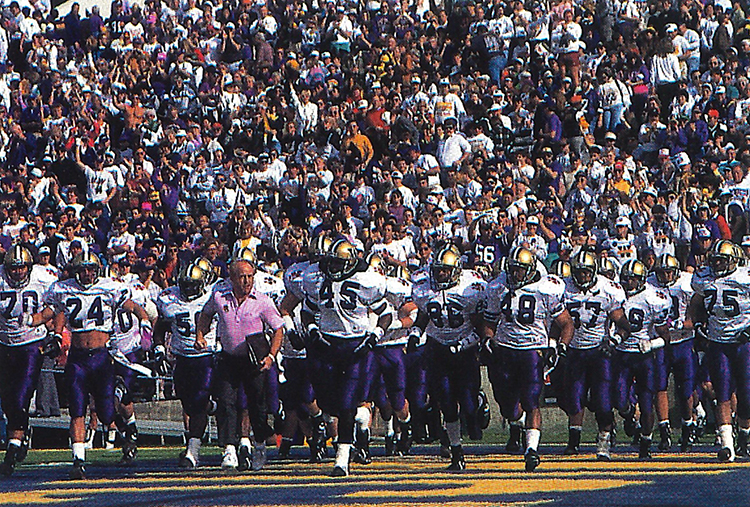 Their moment in the sun: A fired-up UW football team pours onto the field before the opening coin toss at the 1992 Rose Bowl. While most of the week was soggy, New Year’s Day found players and fans basking in California sunshine. 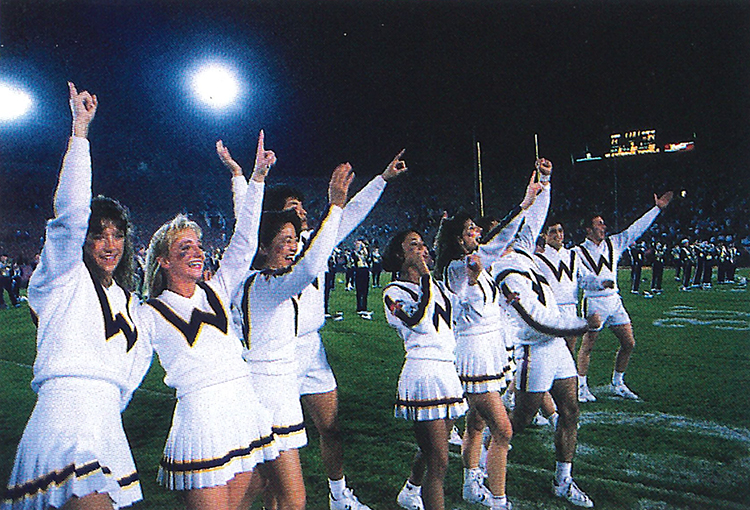 It’s on the board: As Husky cheerleaders celebrate during the fourth quarter, the scoreboard in the upper right shows what turned out to be the final score, 34 to 14. 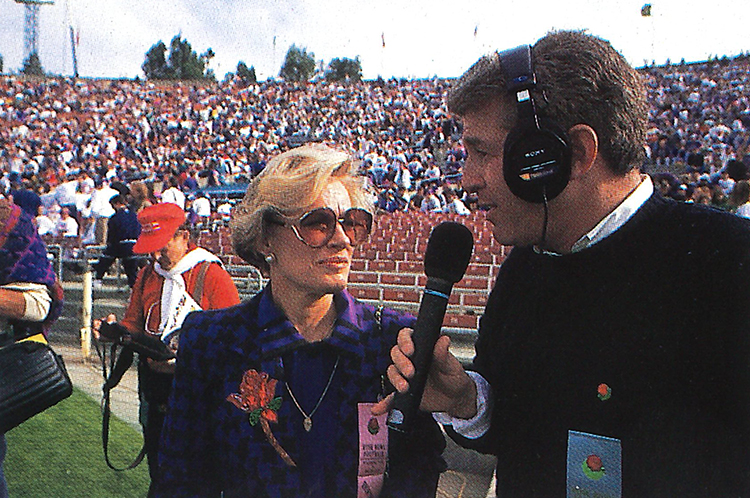 The subject was roses: UW Athletic Director Barbara Hedges, the only woman to head an NCAA Division I program that includes football, drew the attention of the media during Rose Bowl week. 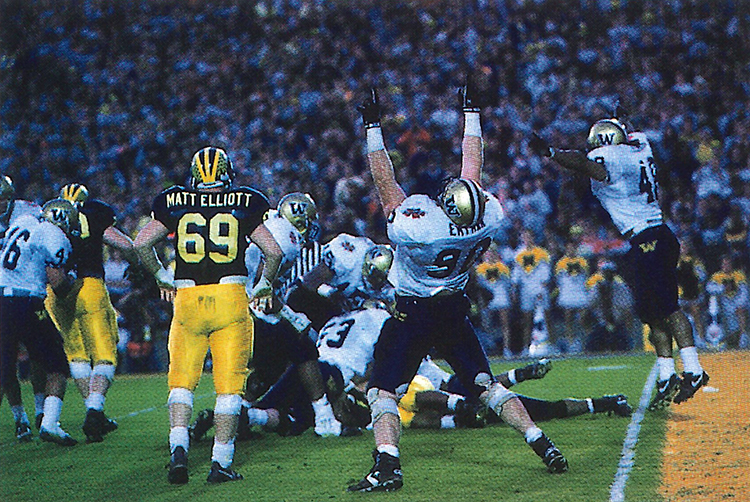 It was a season of superlatives. For the first time since 1915, the Washington football team went undefeated and untied, posting a flawless 12-0 record.

The 1991 Huskies were the first Pac-10 team to have a perfect season since the 1972 USC Trojans. When the Huskies beat Michigan 34-14, it was the first time since 1983-84 that a team had won back-to-back Rose Bowls. And when the USA Today/CNN Coaches Poll ranked Washington Number One, it was the first time a UW team had ever won an NCAA national championship.

The next morning saw the results of the college football polls. While the Associated Press Writers Poll put the undefeated University of Miami Hurricanes number one, it ranked Washington second by only four points—the closest vote in the poll’s 56-year history. The coaches poll from USA Today/CNN had a slightly larger spread in favor of Washington: 1,449.5 points to Miami’s 1,440.5.

Sharing the national title didn’t bother Coach Don James, who ironically is an alumnus of the University of Miami. “It’s the fairest thing that could happen,” James told a Jan. 2 press conference. “It would have been a tragedy if it had been anything else.” Asked about a national playoff game, James dismissed the sportswriter’s dream. “We’ve got enough guys banged up. They don’t need another game,” he declared.

As part of the Rose Bowl festivities the UW Alumni Association held a New Year’s Eve party and a pre-game rally for the fans who travelled to Pasadena. Nearly 11,000 alumni, students and friends attended the New Year’s Eve bash at the Anaheim Convention Center. On New Year’s Day more than 8,400 fans streamed into the Washington Warm-Up rally at the Brookside Golf Course just north of the Rose Bowl. 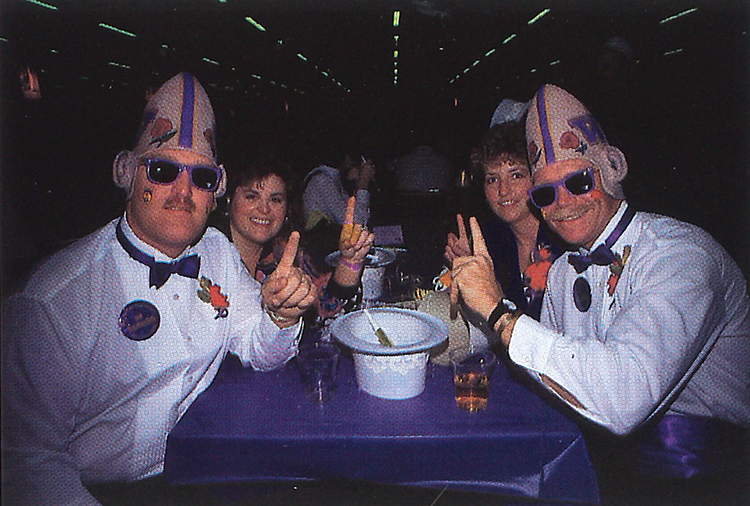 The UWAA New Year’s Eve bash saw some remarkable displays of Husky Fever, including these Beldar lookalikes voting UW Number One. From the left are Roger and Teresa Steves and Diane and Phil Lonborg. All hail from Olympia, or should we say the planet Remulac? 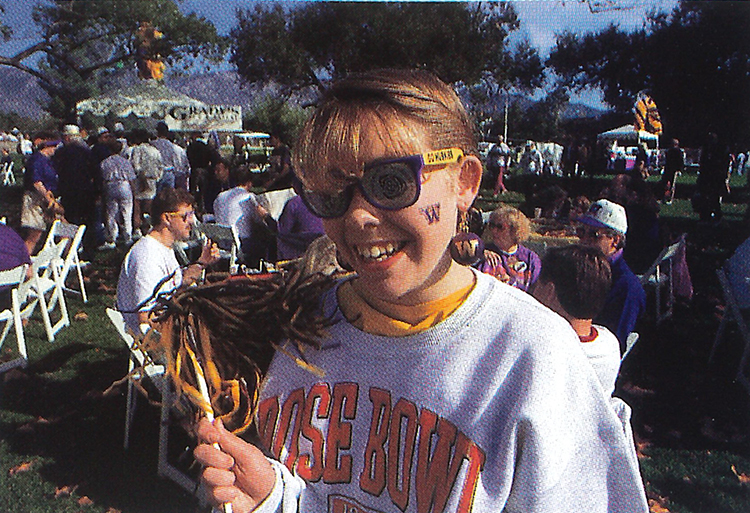 Dig those sunglasses: When the sun came out New Year’s Day, everyone at the pregame Washington Warm-Up donned Husky sunglasses courtesy of the UW Alumni Association. Here, Amanda Tischer, a sophomore from Renton High School, sports a full set of Husky memorabilia. 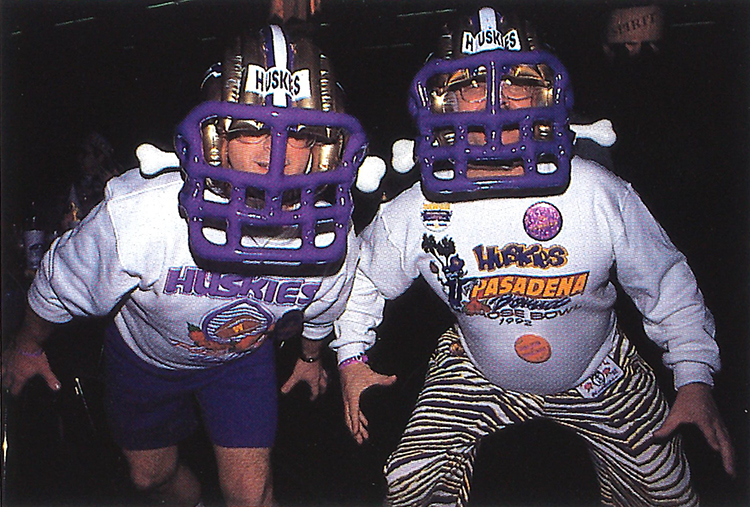 Right colors, weird gear: Paul Hanson and Ron Sieker, both from Seattle, showed up on New Year’s Eve with purple and gold inflatable helmets complete with Styrofoam bones as accessories. 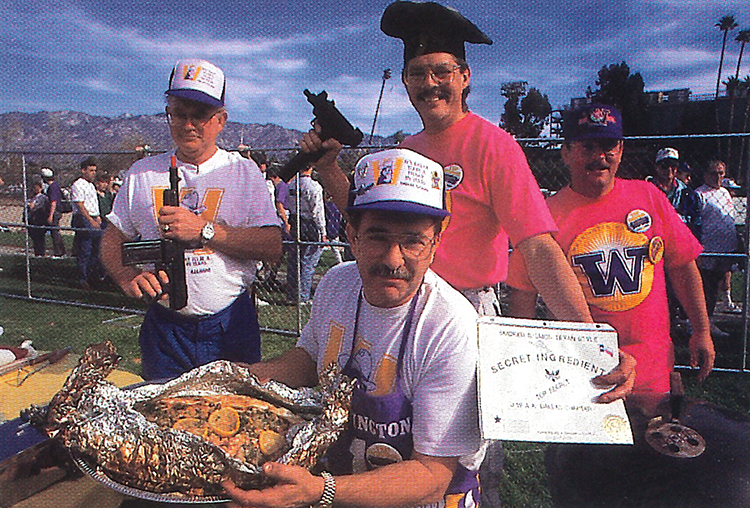 Supreme salmon: One of the highlights of the Washington Warm-Up was an alumni salmon bake-off. Judges, including food critics from Sunset magazine and the Tacoma News-Tribune, and Seattle Mayor Norm Rice, ’72, ’74, unanimously chose the Dallas club’s entry, held here by Chief Chef Jeff Wood, ’66. Other Dallas-area Huskies hold water rifles to guard the club’s “secret recipe,” which turned out to be fajita seasoning.