The day the UW campus went ‘Bully’ for Roosevelt 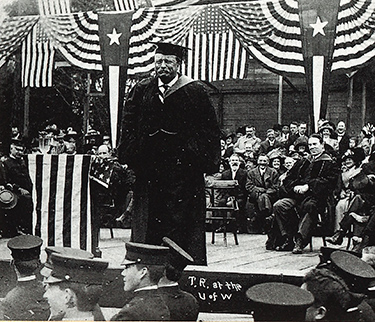 “One of the great assets of the state of Washington has been its forests. You have only very recently begun to wake up to the fact, and as yet you are not perfectly awake, that you can’t afford to waste your forests,” declared a famous environmentalist during a visit to the University of Washington.

“So with our fisheries,” the environmentalist continued. “All of us know by a rather painful experience that river fisheries are only too easily exhausted and are finding it also true of our sea fisheries.”

“If you permit a few men to make a good deal of money for a few years by completely destroying the salmon industry in any river, it is your own fault, because if you choose, you can keep it a permanent industry to be handed on among the permanent assets of the state to the generations that are to follow you,” the speaker added.

Who was this environmental crusader—Silent Spring author Rachel Carson? Friends of the Earth founder David Brower? “Green” presidential candidate Barry Commoner? Try “None of the Above,” for this conservationist was ex-President Theodore Roosevelt speaking to an overflow crowd on April 6, 1911.

“Teddy” Roosevelt had been out of office for two years, yet his popularity was never higher. The “trust buster” and builder of the Panama Canal caused a sensation when he stepped into the UW’s “Natural Amphitheater,” an open-air theater built for the 1909 Alaska-Yukon-Pacific Exposition that is now the site of Padelford Hall. “Such was the intense strain with which some of his admirers hung on his words that two women fainted,” the Seattle Times reported.

UW officials were proud that Roosevelt had come to the UW. In his introduction, President Thomas Kane noted that the UW “is an institution after his own liking—a state university.” He pointed out that Roosevelt had a special affinity for the region. “More than any other man, he has shown how well he knows and appreciates the great West,” Kane declared.

Were these political comments a hint of what was to come? Roosevelt was concluding a five-week journey of the South and West and some political leaders interpreted it as a bid for another run at the presidency. In the elections of 1910, the Republicans had taken a drubbing. Many were becoming dissatisfied with President William Howard Taft.

But Roosevelt denied that the tour was a bid for a comeback. He even wrote to Taft on April 1, “Well, thank Heaven! I am coming to the end of the last speaking tour I shall ever make.”

But like a 1990s rock band on its “farewell tour,” Roosevelt couldn’t resist another try for the prize. Eventually he would run for a third term, and when the Republicans blocked his nomination within their party, he ran as a third party candidate.

In the election of 1912, Roosevelt carried the state of Washington, but couldn’t carry the nation. However, his timely message of conservationism and public service, delivered on campus that April afternoon, still carries on.