The weaker sex? If there’s a disaster, it’s men 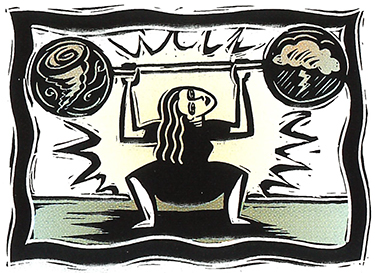 Women are better equipped than men to survive a long-term natural disaster, says a UW anthropology professor who bases his research on a little-known, 140-year-old tragedy of the American West.

UW Professor Donald Grayson studied the fate of the Willie Handcart Company, a party of 429 Mormon immigrants who were trapped by early snowfall in the Rocky Mountains of Wyoming in 1856. In that party, 68 died before the rest were rescued and arrived in Salt Lake City.

Grayson found that the male mortality rate was almost three times that of females, confirming earlier work he did on the Donner Party that showed being female is a key in surviving long-term famine and cold. “Human biology determined who lived and who died,” he says.

Females are better equipped against starvation because, on average, they have a higher proportion of body fat and, above age five, a lower basal metabolism, he explains. A higher proportion of that body fat is subcutaneous—an excellent insulator. Physical activity and differing sex roles were not factors in the higher death rate for men, he adds. While men were expected to do more labor, both sexes shared in pulling or pushing a handcart 1,300 miles from Iowa City, Iowa, to Salt Lake City.