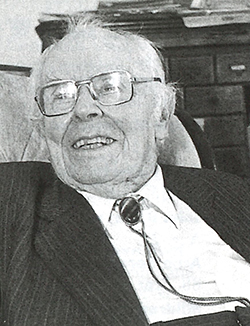 Theodor Jacobsen, who for nearly 40 years was the sole member and “executive officer” of the UW astronomy department, died July 17. He was 102.

As a 7-year-old in his native Denmark, Jacobsen received his first telescope, a two-inch paper tube with a lens in it. He never stopped looking at the stars for the rest of his life..

Jacobsen, who came to the U.S. with his family when they disagreed with the socialist movement in Denmark, earned degrees from Stanford and the University of California, Berkeley, where he was that school’s only astronomy student. He joined the UW faculty in 1928 and, for 36 years, he was the only member of the UW astronomy department. He would typically teach two classes per quarter and spend the rest of his time calculating measurements of starlight wavelengths from his office in the UW campus observatory that still has his name on the door.

A man who always wore a suit and tie to work, Jacobsen was remembered by friends as someone who thought carefully before he spoke, and only spoke when he had something to say. At one point in his UW career, he went nearly a decade without a pay raise because the dean forgot about him. “He just never said anything about it,” recalls Paul Boynton, a professor of physics and astronomy.

The department Jacobsen started is now internationally recognized, with more than 30 faculty and researchers. In addition to teaching, Jacobsen also served as curator of astronomy at the Burke Museum before he retired in 1971.

Jacobsen never lost his passion for astronomy in retirement. When he was 98, he wrote the book Planetary Systems from the Ancient Greeks to Kepler, which was published by the University of Washington Press. In the book, he recreated theories of ancient astronomers using modern math to explain how they were derived.

Jacobsen was also an accomplished pianist, entertaining fellow residents at the North Seattle retirement center where he resided. He and his late wife had no children, but they kept Welsh Corgi dogs named for famous astronomers.