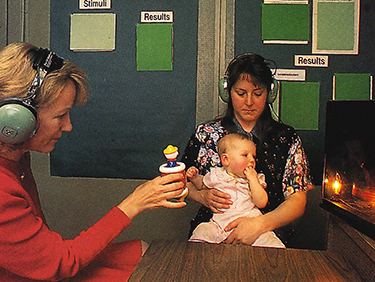 Professor Patricia Kuhl holds a toy in front of an infant being tested for language awareness. Photo by Joe McNally.

In the check-out line at the grocery store, a mother bends to the toddler at her side. “What a sweetie,” she coos. Following the line of her son’s finger to a wiggly, blue, plastic spider in the rack, she goes on, her voice high-pitched and clear over the rattle of cash registers and paper bags. “Do you want one of those?”

Beaming at her child’s intelligence, the mother bestows the toy. A captive audience, the rest of us smile, shake our heads, and idly ponder how a being so small and vulnerable can be talking already. Amazing. It seems that suddenly, around 18 months of age, after a few months of babbling and producing single words, kids just start talking their heads off. How do they do it?

Patricia Kuhl has more than a passing interest in such questions. Professor of speech and hearing sciences and recently appointed the Virginia Merrill Bloedel Scholar, she’s been working for more than a decade at the University of Washington’s Child Development and Mental Retardation Center (CDMRC) to unlock the mysteries of language. She’s also just been elected to the Neuroscience Research Group at the Scripps Institute run by Nobel Laureate Gerald Edelman.

Some of her findings challenge traditional theories of speech development and indicate that experience shapes language perception far earlier than once thought. That and other research is helping to shape new and better methods for teaching second-language learners, the hearing impaired and the learning disabled—and sheds light on why human two-year-olds are still smarter than computers.

Until now, it was generally accepted that babies begin to learn language patterns and categorize sounds at around one year, when they begin to produce words and understand word meanings. By learning the difference between a ball and a bell, for instance, they learn that the distinction between the “ah” and “eh” sounds is important.

One of Kuhl’s recent studies with American and Swedish infants turns this theory on its head. Babies are born “language universalists,” with no known propensity for one language or another, explains Kuhl. But by six months of age, she and her fellow researchers found, infants are categorizing sounds by phoneme groups relevant to their native tongues. In other words, some sort of priming process is going on before they make that oft-noted burst into language between one and two years of age.

In the study, infants were seated on a parent’s lap while continuous sounds were piped in through a loudspeaker. The babies were taught to turn their heads toward the speaker when the sounds changed. When they gave the appropriate response, the infants were rewarded by the appearance of a toy bunny playing a drum (kind of like an Energizer commercial). To keep them from otherwise signaling the child, the parent and tester wore headphones playing music so that they could not hear when the sounds changed.

Once the infants were taught the head-turning behavior, Kuhl and her fellow researchers could test how sensitive the babies’ responses were. In particular, they were interested in whether infants were already categorizing sounds according to their native languages. Indeed, they were.

The study looked at 32 Swedish and 32 American babies, and used the concept of phonetic “prototypes,” idealized representations of key language sounds. Half of each group was tested on the common English “ee” sound (as in the word “fee”), which is not found in Swedish, and half were tested on the “eu” sound (made by holding your lips to make a “u” and saying “ee”), which is ordinary in Swedish but not English.

What researchers observed was that, while American infants ignored normal variations from the prototype of the “ee” sound (for instance, slightly distorted by a head cold or muffled), they still distinguished such variations in the “eu” sound. The exact opposite was true for the Swedish infants. Infants in both countries ignored minor variations in the native-language sound, making their language perception more efficient. While six-month-old infants may not yet know why such distinctions are important, they know the difference.

Native-language prototypes, explains Kuhl, “act like a magnet, drawing similar sounds into one slot to make language processing possible. What is interesting is that this is happening in the absence of any word meaning.”

Parentese—more commonly called baby talk—may contribute to infants’ early categorization of sounds, Kuhl says, and she is working on spectrographic analysis of such speech to see how it differs from normal adult talk. She thinks that clear enunciation and prolonged vowel sounds may help to prime infants for language processing.

Stanford Psychologist Anne Fernald, one of Kuhl’s former students, has already performed studies that show infants respond more strongly to parentese (their heart rates rise), that they understand the emotional messages more clearly, and that, at one year old, they understand words better when they’re spoken in parentese.

There are many ramifications of this research, Kuhl points out. First, it reinforces the importance of early treatment of ear infections that may hamper hearing in infants. Also, Kuhl says, it emphasizes how much parents should talk to their children. And baby talk, long thought of as a silly habit, probably deserves a far better reputation.

In addition, the research helps explain why it is often so difficult for adults to learn new languages. Adult language learners almost always speak with an accent and especially have trouble when they must distinguish sounds not found in their native tongues. The English speaker’s difficulty with the Spanish “p” and “b,” and the Japanese speaker’s difficulty with the English “l” and “r” are two common examples.

“The reason that Japanese people have a hard time articulating and hearing the difference between our ‘I’ and ‘r,'” Kuhl says, “is that in their language they are distant members of the same sound category, the prototype of which is halfway between them.”

Learning language involves creating a mental map that ties sounds to categories. Once these categories are learned, she notes, they are fairly rigid. The categories form a set of perceptual filters, like holes in a sieve, through which language must pass.

“We don’t know exactly when this map begins to solidify—certainly not at six months—but the younger a child is when a family moves to a new country, the more likely it is that he or she will learn the new language. The brain is still sufficiently plastic to reconfigure the map. By six months of age, we are already beginning to be culture-bound.”

Once you’re an adult, a different mechanism is required for learning language. Until puberty, it seems, the brain is using some automatic, unconscious, spongelike method. After that, it’s a matter of memorization and practice. A likely reason for the difference, she says, is the neural “pruning” that naturally occurs in our brains as we age.

Back in that line at the grocery store, it’s your turn to check out. Through the din of clanging shopping carts, clacking and ringing registers, beeping bar code readers, whirring conveyors, and multiple conversations, the clerk mumbles something you can’t quite hear. You turn and watch her face when you ask her to repeat her words. She answers “Any coupons?” in the same bored, low tone, but you have no problem understanding this time. And did you ever notice how you actually hear better with your glasses on?

Another area of Kuhl’s research involves the integration of visual and auditory cues that are a part of most person-to­person commmunication. Lip-reading, she says, is common to more than those who are deaf.

In one early study, she found that adults who were shown a film of a person pronouncing “ga-ga,” but with the soundtrack dubbed over as “ba-ba,” perceived the sounds as “da-da,” a halfway compromise between the visual and auditory clues actually given. That intuitive knowledge corroborated in the lab, Kuhl and Psychology Professor Andrew Meltzoff began to wonder how early infants were learning that facial expression and sound correspond.

In a collaborative study, Kuhl and Meltzoff found that infants manifest lip-reading behavior at a very early age. In one study, they found that 18- to 20-week-old infants could already detect the correspondence between facial movements and speech sounds.

The infants in this study were shown side-by-side films of the same person’s face as that person articulated words with two vowel sounds, “ah” (pop) and “ee” (peep). Both films were synchronized with a soundtrack that played only one of the words being spoken. Kuhl and Meltzoff hypothesized that if the infants were aware of the correspondence they would look more often at the face matching the sound. In fact, they did, devoting 73.6 percent of their time to the correct face, a number significantly higher than the 50 percent chance level.

These results, Kuhl notes, suggest that infants born with mild hearing problems might benefit from treatment that involves seeing as well as hearing. “Traditionally, lip-reading has been rather looked down upon,” she says. But the brain is organized to integrate information across the auditory and visual senses. “This is a very natural part of language acquisition and should certainly not be discouraged in any child who has some residual hearing.”

Toting your bag of freshly bought groceries, you stop at the cash machine outside the store so you’ll be able to pay for those Girl Scout cookies you ordered last week. It’s a pain to balance the teetering bag while you extract the card from your wallet and punch in all those numbers. It would be so much easier if you could just tell the machine what you want. But despite major advances in computer technology during the past decade, computers still can’t understand—or reproduce very well—human speech.

“Machines can’t sort out which sounds are important, and they can’t categorize sounds that are not exactly the same, but which people are able to hear as the same,” Kuhl explains.

“This is a major issue in the field of artificial intelligence,” she says, pointing out that there could be many benefits to breaking through this barrier. ”Just think of all the situations in which it would be helpful to be able to have verbal exchanges with a computer. It would open whole new worlds, especially for the physically handicapped.

“Human sound pattern recognition is a very sophisticated thing,” she continues. “Babies learn just by listening. They seem to construct a map that is stored in memory. And these stored memories act as magnets for sounds. As far as categorization goes, babies are still way ahead of computers.”

Not that computers and other “high tech” equipment can’t help in speech research. Indeed, Kuhl is trying to attract funds to create an interdisciplinary center devoted to speech research and technology.

And so, together with engineers, computer scientists, linguists, psychologists, doctors, physiologists and others in her field, Kuhl is trying to develop a picture of how human infants can perform the amazing feat of learning speech and language. Part of her role is understanding the details of speech itself—through spectrographic analysis of the sound frequencies of speech. And part is studying infants’ speech development in the lab to find out what makes them “the fanciest learning machines ever invented.”

Lisa Roney is a graduate student in creative writing at Penn State University. During the summer of 1992 she served as acting associate editor of Columns.