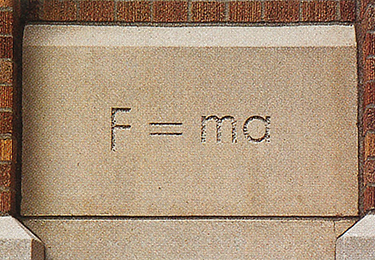 Newton’s Second Law is represented on the facade of the new Physics/Astronomy Building.

You won’t find E=mc2 on its sides, although Einstein’s famous equation is represented in a less ambiguous format. Look closer and you will also see the ideas of Isaac Newton, Max Planck, James Maxwell and Werner Heisenberg literally carved in stone.

In the ever-changing world of physics and astronomy, it is a bit of a risk to inscribe 30 formulae and diagrams on the side of a building, but that’s what architect Cesar Pelli wanted to do with the new Physics/ Astronomy Building, which opens this fall.

“I picked things that I hoped would be timeless and of pretty universal significance,” says Physics Professor David Boulware, who had the thankless task of deciding which formulae and diagrams to use. “I tried to avoid things that wouldn’t last. Of course, I failed.”

At least one number is already out of date, but that was to be expected. In honor of the Nobel Prize-winning research of UW Physics Professor Hans Dehmelt, Boulware chose Dehmelt’s measurement of the “magnetic moment” of an electron. With the publication of new research this year, that number has already been slightly revised.

But Boulware is convinced most of the formulae will stand the test of time, such as Newton’s Second Law (F=ma) and the Heisenberg Uncertainty Principle. Newton’s law “was really the beginnings of modern physics,” he explains, while Heisenberg’s equation is “emblematic of the advent of quantum mechanics.”

Astronomy is also well represented. One diagram shows the “black body curve,” a measurement of radiation at the edge of the universe. “It is experimental evidence of the ‘Big Bang’ theory of the creation of the universe,” Boulware explains.

Taking risks is what scientific research must do if it is to break through the boundaries of current knowledge. The inscriptions on the new Physics/ Astronomy Building signify how far those boundaries were stretched at the end of the 20th century. For those of you who can’t come to the campus for a look, turn to the cover story in this issue for a visual tour of this spectacular new building.

Tom Griffin is the editor of Columns.