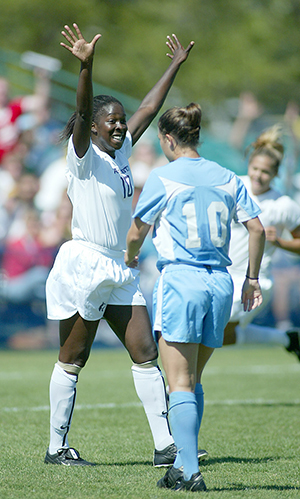 Ellertson during her playing days.

Fans of Husky women’s soccer may do a double take this season if they look at the sideline and see one of the best players in school history working as an assistant coach. That would be Tina Frimpong Ellertson, who is part of coach Nicole Van Dyke’s staff.

Ellertson, who played for the Huskies from 2001 to 2004, still holds the school record for most goals and total points. A two-time All-American and Pac-10 Player of the Year, she helped the Huskies reach their ﬁrst Elite Eight.

“My four years at the UW are probably my favorite,” she recalls. “When I think about that time, I found my conﬁdence and was able to become the player I wanted to be.”

Ellertson played on the U.S. National Team in the 2007 World Cup as well as in women’s pro soccer leagues. After her playing career, she worked as a coach, including time guiding the U.S. youth teams before rejoining the Huskies this year.

“I’m excited to go back and be at my alma mater,” she says. “My goal is to make sure somebody beats [my] records.”