Tiny ice particles may reveal how clouds regulate the weather 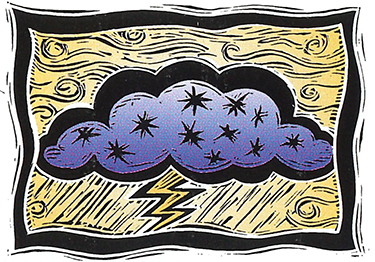 Clouds are the thermostats of climate control. As they grow or shrink, they are the major factor in the flow of solar heat and radiation back and forth between space and Earth.

But scientists are still puzzled by how clouds exactly rule the skies. At the UW, they are looking at tiny, cloud-borne ice particles no larger than the thickness of a human hair. These particles play an important role in regulating temperature, screening solar radiation and serving as a platform for complex chemical reactions involved in ozone depletion.

Previously, scientists thought these particles were relatively rare—and short-lived. Now researchers know the particles “exist for a much longer time than previously believed and are far more widespread,” says Geophysics and Atmospheric Sciences Professor Marcia Baker. “It suggests that they have a longer duration of influence on various climatic processes.”

Baker and J.T. Nelson of the National Center for Atmospheric Research believe the key to understanding these particles may reside in the shape and surface structure of the ice crystals. “We think surface is more important in smaller atmospheric ice particles,” Baker says. “Larger crystals form and evaporate much faster.” If their theory is confirmed, another puzzle on how clouds control the climate may be solved.