Ty Harden, ’08, took a break from MLS soccer to help others 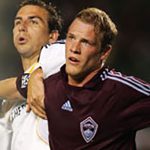 One year after his rookie season, Ty Harden walked away from his dream job playing Major League Soccer. The former UW men’s soccer standout started 24 of the Los Angeles Galaxy’s 30 games in 2007 and had a bright future. It was an agonizing decision to quit.

“It all changed when I got drafted,” Harden says. “I love soccer but I thought, ‘This is what I’m doing with my life?’ I wasn’t done with school, and I really wanted to finish my degree. There was so much more I wanted to experience.”

Harden returned to Seattle and finished his business degree, then went to Switzerland with his girlfriend, Emily Florence, ‘08, a former UW women’s basketball star who had signed to play professionally in Europe. With a pedigree for helping others—both of his parents worked for Goodwill—Harden moved to Africa for six weeks to work as a volunteer at Hamomi, a children’s center in Nairobi.

“That was really eye-opening for me,” Harden says. “I taught a class, and I’d never done that before. We arranged for nurses to come see the kids, and we talked to some doctors to see if we could get them some kind of health care. We started doing home visits to meet all of their families. I ended up doing so many things.”

He also rekindled his passion for soccer, setting up the school’s first soccer team and arranging some games with other schools. “It was fun to coach,” Harden says. “The school itself is in a real slum. But what took me by surprise was how happy everybody was. They’re loving, friendly and sweet kids. And they’re happy with so much less.”

Harden left Hamomi in December 2008 and came back home. The Colorado Rapids traded for his rights, and with his love for the game renewed, Harden joined a new MLS team. “I definitely missed it,” he says. “I missed the competition, the game, being away from the guys. I trained hard, and as soon as I got back, it was like I hadn’t missed a day.”

Many MLS stars were moved by Harden’s selflessness. “I am completely impressed by what Ty did,” Landon Donovan, former Galaxy teammate and U.S. national team captain, told ESPN.com. “I always encourage people to follow their hearts and Ty certainly did that. We tend to get too caught up in sports and start believing that sports are the most important thing in the world. What Ty did was much more important than any soccer game will ever be.”