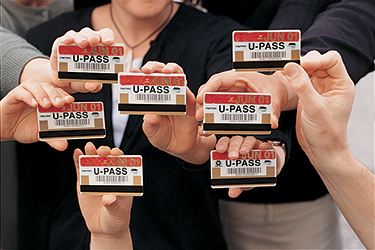 The theory was, if you had it in your wallet you would be more likely to use it.

That was the idea the University of Washington put to the test when it launched the U-PASS program 10 years ago, in the fall of 1991. With Seattle traffic choking on itself, the UW—home to 50,000 people—teamed up with Metro and Snohomish County’s Community Transit to reduce congestion in the University District, one of the city’s most clogged areas.

The plan was simple—offer a pass that would allow UW students, faculty and staff to ride free on Metro and Community Transit buses for a fraction of the cost of a regular bus pass ($20 per quarter for students, $27 for faculty and staff). The UW also increased campus parking rates to encourage bus use.

UW and Metro officials expected to see a 10-20 percent increase in ridership. But they were way off the mark. The increase topped 35 percent.

“It was much more successful much sooner than we thought,” says Peter Dewey, UW transportation manager. “Too many people bused. There wasn’t enough parking revenue.”

The community was also caught off-guard. “It was a brilliant idea,” says Patty Whisler of The Ave Planning Group, a local advisory committee, “but I was surprised that it was as successful as it was.”

While transit use skyrocketed, the U-PASS offered much more than a free bus ride. It promoted a range of transit options, including carpools, vanpools and bicycle commuting, and provided discounts from more than 40 local merchants, where U-PASS holders could receive everything from free checks at Bank of America and Wells Fargo to free jazz dance classes at Martha Nishitana Modern Dance School.

By dramatically reducing the number of cars coming to campus, the U-PASS allowed for badly needed campus growth. The fisheries, oceanography and electrical engineering/computer science buildings, as well as the H and K wings of the Health Sciences Center, were built on campus parking lots no longer needed for cars. Over the past decade, the campus population increased by 6,000 people without adding one parking stall.

For its success, the U-PASS program—which despite a 10 percent increase in campus population has reduced morning peak-hour traffic in the “U” District by 17 percent—has won 11 local and national awards, including a 1998 honor from the Environmental Protection Agency and the 2000 Diamond Ring award from Commuter Challenge, a King County nonprofit organization.

Despite its stunning success, the U-PASS isn’t standing still. In the future, the U-PASS planners will devote even more attention to the commuter’s changing schedule to see if they can get more people to give up their cars. “People can change their commute day to day,” says Dewey. “It changes how we approach people.”

Among the changes under consideration is making drivers pay for parking each time they come to campus instead of being able to buy a quarterly parking pass—yet another incentive to leave their car behind. The program is also working with UW Housing and Food Services to build more student housing near campus so students can walk or bike to campus. Despite any future changes, one thing remains: the U-PASS is more than a free ride.