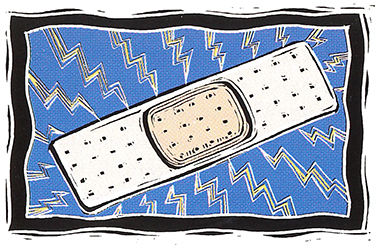 Sound waves could be used to control internal bleeding suffered by soldiers on the battlefield or motorists in a car wreck if a $10 million UW research project is successful.

Currently doctors use high-intensity, focused ultrasound to kill unwanted tissue, such as a tumor. While using the technology, they found that blood in the surrounding area undergoes changes that stimulate coagulation.

Over the next five years, UW researchers want to develop technology using ultrasound to pinpoint and image the exact places where internal bleeding occurs and then, by increasing the amplitude of the sound wave, to stimulate coagulation.

“It could lead to new kinds of emergency treatment at the scene of an injury,” says the project’s lead scientist, Larry Crum of the UW Applied Physics Laboratory. The laboratory is working with the UW School of Medicine and a private firm to perfect the technique.