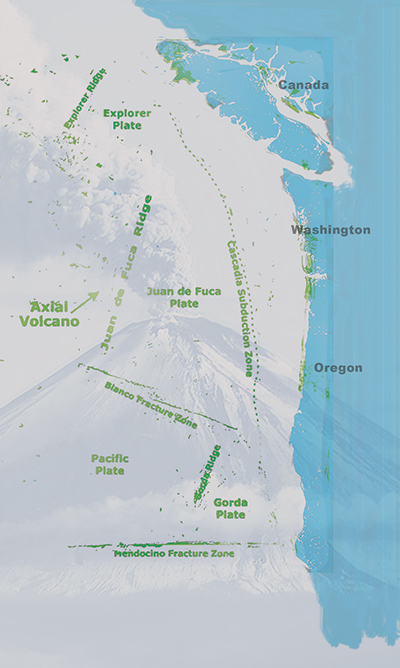 In April 2015, the Axial Seamount, an active underwater volcano about 300 miles off the coast of Oregon, erupted. For the first time ever, scientists, engineers and students from the UW and around the world could watch it in real time thanks to an elaborate array of sensors they installed a year earlier.

The UW oceanographers had just completed a six-year, $154 million project to design and build an undersea cabled observatory through the National Science Foundation’s Ocean Observatories Initiative. No sooner were the fiber-optic cables and Internet lines connected, than the oceanographers and geologists started detecting tiny earthquakes. In January 2015, UW marine geophysicist William Wilcock noticed that the area was extremely active. “I am even more excited now that I have had time to look at it,” he blogged at the time. “The data show that the volcano is restless and lends support to the growing expectation that an eruption may occur fairly soon.” He noted that the area was experiencing 100 to 200 small earthquakes each day.

Assisted by scientists from around the globe, the UW led the design and construction of the world’s most advanced underwater cabled observatory system. More than 550 miles of fiber-optic cables running from the coast of Oregon near Cannon Beach across the Juan de Fuca Plate connected approximately 140 instruments, as well as instrumented moorings that rise 9,500 feet above the surrounding seafloor. In real time, at the speed of light, pressure and tilt meters, hydrophones “listening” to the sounds of the ocean, chemical sensors, seismometers, and high-definition video cameras were sending data live back to shore.

Then, just around midnight on April 23, the volcano erupted. Over the next few hours, the pressure and tilt sensors across the caldera captured a drop of nearly 8 feet, coincident with more than 8,000 earthquakes as, it appeared, the magma chamber had emptied and lava poured out along the northern rift zone. Without the cable connection, it could have been months before scientists arrived at the site, accessed the instruments and learned about the eruption.

When the UW research vessel the R/V Thomas G. Thompson arrived at Axial three months later, Oceanography Professor Debbie Kelley, chief scientist of the expedition, knew the general location of the flow based on the data streaming to shore. Brendan Philip, ’14, a current graduate student, was aboard the ship, eager to help map the still-hot lava flow and explore the newly formed seafloor. Using sonar on the Thompson, Philip discovered that the lava flow was more than 400 feet thick.

“I still find it hard to believe that such a massive amount of lava can be released from the seafloor in such a short period of time,” he says. “It’s a perfect demonstration of how incredibly dynamic our planet can be.” Indeed, exploration of the summit of the eruption by Kelley and her team documented billions of microbes streaming from the cooling lava flow, fed by volcanic gases.

Seventy percent of the Earth’s volcanic activity happens under the ocean, and most eruptions may not be noticed immediately, says Ginger Armbrust, professor of oceanography. “It gives us this unprecedented view into the ocean,” she explains. The scientists can track the seismic activity, temperature, acidity and “make entirely new discoveries.”

The idea for such a cabled underwater observatory surfaced in the 1990s when professor John Delaney and his colleagues in oceanography started planning a networked set of instruments to provide a comprehensive picture of what was happening off the Pacific Coast. It would allow them to capture earthquakes, detect chemical and temperature changes in the water, document plumes of methane rising from sediments, record images of rare fish, and even tell when blue whales were passing.

Delaney realized his long-term vision in 2014 as chief scientist on the Thompson, when the observatory installation was completed during an 85-day cruise, on schedule and under budget. Now, a team at the School of Oceanography and the Applied Physics Laboratory operate the system, providing data to scientists, educators and citizen-scientists from around the world. This past July, Kelley lead a group of UW scientists, engineers and students on a 39-day, three-leg excursion starting at the Axial Seamount. “There is nothing better than taking excited students out to sea and giving them hands-on experience,” says Kelley. “For many, it is a life-changing experience.”