Universities are a ‘power for good,’ president says in annual address 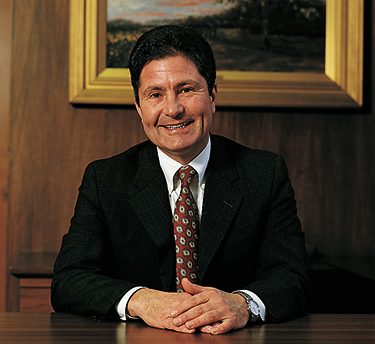 In a sometimes emotional address to the University of Washington community, President Richard L. McCormick reviewed the state of the UW—and the state of the world—four weeks after the terrorist attacks of Sept. 11, stating that there are reasons for optimism despite the recent tragedies.

“We are in for some tough times,” McCormick told the gathering of students, faculty and staff in his annual Address to the University Community Oct. 9. “We will come through our challenges with our spirit and our values intact.”

The President acknowledged the pain and grief Americans are experiencing. “We have suffered the same sudden loss of safety, the same heartbreak at the heroism of many ordinary people, the same dread about where it will all lead,” he told the Kane Hall audience. He reminded them that most classes were going to be suspended two days later so that the UW could hold a Day of Reflection and Engagement on Oct. 11.

He stressed that higher education is crucial to preserving American goals and values. “We have a paramount responsibility for preparing students to live and lead in a global society,” he said. “Now more than ever, we need to strengthen universities and strengthen our faith in our own University as a power for good in the world.”

The University of Washington, as one of the leading public research universities in the nation, has an important role to play. Its success, McCormick said, will depend on its core values, which he described in detail:

Some of these values are under siege, McCormick warned. The pressures on the University of Washington are enormous, especially on its finances. The last state budget was disappointing, he noted. Faculty and staff are about 15 percent behind the salaries of their peers at similar universities. The per-student funding from the state is about $2,000 behind our peer average—more than $70 million a year.

“We will not give up on Olympia,” he declared, but the UW must also take a hard look at other revenue streams. McCormick said the UW should match other state universities, such as Michigan and Virginia, that have gone to a “high tuition/high financial aid” model. “The University gains revenue from families who can afford to pay more, while students in need get enough support to offset the higher tuition,” he said.

McCormick added that any new tuition formula would have to protect the democratic breadth of the student body.

Other sources of support will continue to be federal and corporate research dollars, revenue from transferring UW technology to the marketplace, self-sustaining programs and private gifts. “We have no choice but to look for new resources—to rebalance our books,” he told the audience. “But we must not allow that rebalancing to threaten our essence as a public research university.”

In addition, other challenges to the UW’s core values include pressures from the marketplace that could favor science and engineering over the arts, humanities and social sciences; constraints on recruiting and educating a diverse student body; and the global scale of the problems universities are expected to solve.

Despite the pressure and the uncertainties, McCormick said he is optimistic for the future.

The President said the University is changing to meet the new reality. “Everywhere you look on campus, clusters of disciplines are mounting joint efforts to address big questions, even across such wide disciplinary divides as genetics and philosophy, bioengineering and public policy, architecture and education, information technology and social science,” he declared.

He described several examples of this interdisciplinary convergence. The UW Center for Mind, Brain and Learning focuses on how infants and young children learn, drawing from faculty in neuroscience, psychology, genetics, linguistics, public policy, speech and hearing sciences, and other departments. McCormick also pointed to a new effort to create a “problem-focused” Earth Institute, which would track the scientific links between Earth’s biosystems, such as the oceans and the atmosphere, using the data to help political leaders make tough decisions about the environment.

“I see in these and similar programs a vitality, an energy, a seriousness of purpose, an inventiveness, a go-for-broke mentality, a responsiveness to challenges beyond ourselves, that is compelling and deeply reassuring,” he added.

“When I look across our campuses, at the work you are doing, at the aspirations we share, at the transformations under way, I am enormously buoyed and optimistic about the future,” he said.