University District’s newest hotel takes advantage of its storied past 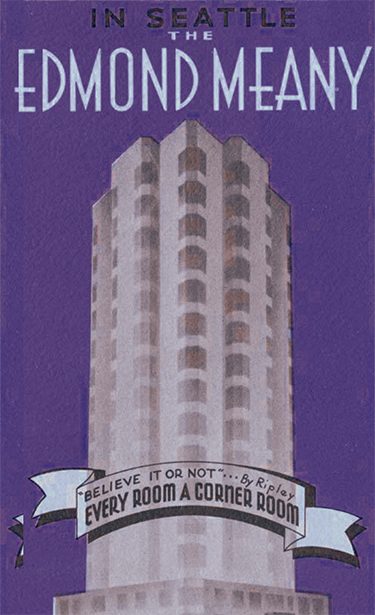 The Graduate first opened in 1931 as the Edmond Meany Hotel.

The University District’s new Graduate hotel does not scream UW or Seattle. It gestures. In the lobby, two long, low couches face each other, covered in a plaid fabric dominated by shades of purple. At one end of the room, speakers and amps culled from Seattle venues flank a giant gold-framed mirror, creating a floor-to-ceiling homage to the city’s music scene. Vintage landscape paintings from around Washington hang opposite the fireplace. One meeting room is named for Thelma Dewitty, a UW graduate student who in 1947 became the first black teacher at Seattle Public Schools.

Tidbits of local history are scattered throughout the guest rooms. A velvet image of Sir Mix-A-Lot here. A wooden side table carved in the shape of a husky there. When the building first opened in 1931 as the Edmond Meany Hotel, it was celebrated for its unique blend of Art Deco and modernist architecture. In a city known for brick and terra cotta construction, the concrete tower stood out, according to historylink.org. Cantilevered corners rounded the hotel’s edges, making “every room a corner room,” with large windows and sweeping views, as a 1940 brochure boasted.

Since opening, the hotel has changed hands and names several times. Its latest incarnation was the Hotel Deca, which closed in 2017 when AJ Capital Partners, which owns the Graduate chain, bought the building. The new hotel reopened with 154 rooms.

For the first time in the building’s history, a rooftop restaurant and bar takes advantage of its full height. Located 16 floors up, the eatery includes outdoor and indoor seating with views of Cascade and Olympic peaks and Mount Rainier.

The Graduate considers its street-level floors community space. Students and those who work or live nearby are welcome to study, hang out, drink wine or take a yoga class. The hotel offers free yoga instruction on Tuesday nights and Saturday mornings as well as free wine and live music from 5 to 8 p.m. every Thursday. Says Theresa Raleigh, the hotel’s marketing director: “We want to be the living room of the U-District.”